The TravelMate 3022WTMi is Acer's first white notebook and, like the others on test here, is designed entirely with the mobile professional in mind. But judging by the styling, it's also designed with the Apple iBook and MacBook in mind and we can't deny it's a welcome change from the norm. 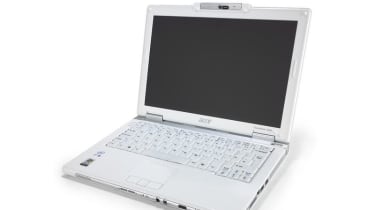 The TravelMate 3022WTMi is Acer's first white notebook and, like the others on test here, is designed entirely with the mobile professional in mind. But judging by the styling, it's also designed with the Apple iBook and MacBook in mind and we can't deny it's a welcome change from the norm.

Build quality isn't quite up to Acer's usual good standard: the palm areas flex slightly when typing, which doesn't inspire confidence. Also, we can't help wondering how much punishment the paint finish can take before scratches and marks appear.

Unlike a MacBook, the white, translucent keys aren't backlit and the whole keyboard bounces as you type - another disappointment. Keys are slightly smaller than others here; it takes a while to get used to the spacing.

Power, thankfully, is no problem for the TravelMate. The combination of a 1.66GHz Core Duo T2300 processor and 1GB of memory led to a score in our Microsoft Office tests of 0.92. This will let you use several applications at once with room to spare.

With built-in Wi-Fi and Bluetooth, wireless access is simple and there's also gigabit Ethernet and a V.92 modem. A card reader can handle SD, Memory Stick and xD-Picture cards and there's a PC Card slot, too. Three USB 2 ports are welcome, and there's a full-size FireWire port. The main reason for the latter is to power the external DVD writer - Acer couldn't find room in this TravelMate to crowbar one in. At least it's finished in the same white and silver livery and is included in the price.

The 100GB hard disk offers 89GB of usable space - the most on test - and there's a high-resolution webcam and microphone for videoconferencing. These gain some brownie points back after the external optical drive, but considering the space this frees up, we were yet again disappointed by the battery life on offer.

Two batteries are bundled, the smaller one fits flush at the rear, making the Acer only 210mm deep. But it only lasts 90 minutes with light use, and you'll be lucky to work for 45 minutes if you're using all the power on tap. The bigger 6-cell battery will last anywhere from just under two hours to 3.5 hours depending on workload, but the combined lives of the two still falls behind all but two of its competitors here.

Even if this, the external DVD drive and average build quality don't bother you, the lack of security and minimal warranty should. There's no fingerprint reader, hardware encryption or hard disk shock sensor - only Acer's software encryption utility can be used to safeguard passwords and other sensitive data. The single year of return-to-base warranty is also stingy at this price.

Finally, the 12.1in TFT isn't the best example here. It suffers (like the Lenovo) from a lack of brightness as well as having relatively poor viewing angles. It isn't terrible, but when there are much better displays on offer, it's yet another reason to avoid the Acer. Compared to others, here, the TravelMate simply has too many flaws to be seriously considered as a long-lasting business tool.

Uninspiring build quality, a mediocre TFT, a short warranty and minimal security make the TravelMate one to avoid.