Great battery life, but lack of an optical drive disappoints 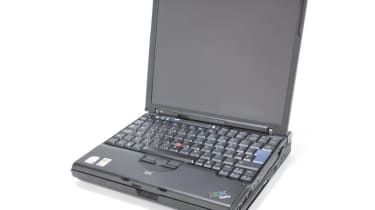 The ThinkPad is one of the biggest brands in the notebook world, and the X60 is Lenovo's thinnest and lightest model. Unashamedly aimed at business users who spend the majority of their day away from a desk, its primary concern is to provide enough battery life for a full day on the move.

And on this count it fully succeeds, lasting a full ten hours with light use. Heavy use reduces this to a little over three hours, but with a typical spread of web browsing, Office and email use, it should see you through from 9 to 5.

The magnesium alloy chassis will also ensure the X60 lasts a lifetime on the road, with the subtly hooded lid providing supreme twist resistance for the 12.1in TFT. It's the only non-widescreen display on test and also has the dubious honour of sporting the lowest resolution of 1,024 x 768. It isn't stunningly bright when hooked up to the mains, and dims slightly on battery power, with no way to override back to full brightness.

As with previous ThinkPads, the keyboard is firm but instead of a Crtl key in the left corner, there's a Fn key. Other than this, it's a great example of how a small keyboard can be very usable. Plus, we also like the Trackpoint instead of a touchpad as it's more precise.

Beneath the mouse buttons is a fingerprint scanner, while a TPM chip takes care of hardware encryption. Lenovo includes software to take advantage of this hardware encryption - part of the ThinkVantage package. It's easily accessed thanks to the blue ThinkVantage button, which pops up a comprehensive menu allowing you to register fingerprints, manage Wi-Fi connections, configure backup schedules and restore the original factory settings. It's the most cohesive manageability tool around.

There's no smart card reader, though, and no Bluetooth. Wi-FI, gigabit Ethernet, a modem and infrared are all you get. There's a reasonable array of connectors on the sides, including three USB 2 ports, an SD card reader, mini-FireWire and a VGA output.

Conspicuous by its absence, though, is an optical drive: a factor which will undoubtedly put many off. Unlike the Dell, there isn't a separate one in the box - you'll have to fork out an extra 126 for an X6 Ultrabase docking station, and yet more for a drive to go in it. And despite being more expensive than the Dell to start with, the warranty isn't on-site, though it does last three years. Compounding matters, the hard disk only offers 51GB of space and there's only 512MB of RAM.

However, the X60 has one final trick - a full-blown Core Duo T2400 CPU which makes it the second fastest machine on test. But few people will need this power and the Dell bests the Lenovo in three key areas: storage, warranty and screen. Plus, Sony proves that you can have an optical drive and long battery life with the TX3XP, albeit at a higher cost and without the performance. Ultimately, the X60 offers a good combination of power and battery life, but at this price, we can't recommend it over the Dell or HP.

Amazing battery life, but the return-to-base warranty and lack of an optical drive are disappointing when others offer better packages for less outlay.