The Aston Martin of ultraportables, but without the power. The expensive Sony has the wow factor, but is slow and has a poor warranty. 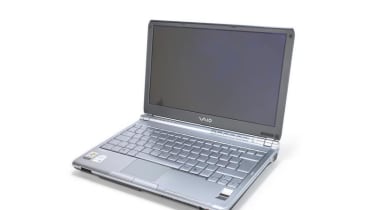 While we've rounded up the cream of current ultraportables, even the other seven here can't match Sony's TX3 for sheer size and weight. It tips the scales at only 1.3kg and measures just 272 x 195 x 29mm, making it the most portable here.

Admittedly, it does sacrifice screen size for this: it has an 11.1in TFT, yet it still boasts a 1,366 x 768 resolution. This is a 16:9 ratio, rather than the typical 16:10 offered by laptops, making it a better candidate for watching the odd movie. And judging by the glossy, bright screen, this is what Sony is suggesting. Just below the screen is a row of playback control buttons including an AV Mode button which lets you watch DVDs or listen to CDs without booting into Windows. The important factor is the integrated DVD writer, an almost unbelievable inclusion considering the TX3's dimensions.

But there it is, along with a VGA output on the right-hand side. On the opposite side are two USB 2 ports, a Type II PC Card slot and a modem connector. A mini-FireWire interface can be found on the rear with a 10/100 Ethernet port while card readers for Memory Sticks and SD/MMC cards are on the front. Next to these are headphone and microphone inputs, volume controls and a wireless on/off switch for the 802.11a/b/g and Bluetooth radios. Security-wise, there's a fingerprint scanner, a TPM chip and a G-Sensor to protect the 67GB hard disk in the event of a drop.

It's a wonder Sony has managed to fit all these components into the TX3 and, inevitably, there are compromises. One is build quality. The screen is only a few millimetres thick and, although the casing is made from carbon fibre, it twists alarmingly with little force. Pressure is distributed evenly enough to prevent the TFT from damage, but you'll still need to look after the TX3 with great care.

The other compromise is power. The Sony is the only notebook here not to boast a dual-core CPU, instead opting for an Intel Core Solo U1400 at 1.2GHz. With 1GB of DDR2 memory, this managed only 0.5 in our benchmarks, making it roughly half the speed of the Lenovo. Applications take a little longer to load, but unless you're pushing the Sony hard by running multiple apps at the same time, it won't feel slow in general use.

Ultra-low voltage CPUs have their advantages though, and the Sony lasts over nine hours if you're only using it lightly. And even if you're working hard, you should still get around five hours of use before needing to recharge - a better effort than the Lenovo.

But, despite the price, the TX3 only comes with a one-year warranty, which will be a big disappointment for many. Extending the warranty for two years will cost you 170, but that's still for return-to-base cover.

Make no mistake though, popping the TX3 out on the train will draw envious glances. And if that's what you're after, it won't disappoint. But for those who don't demand a Vaio badge on their carbon fibre lid, there are better choices here.

The Aston Martin of ultraportables, but without the power. The expensive Sony has the wow factor, but is slow and has a poor warranty.