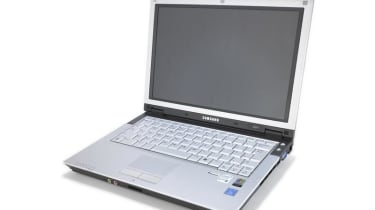 With its metallic red lid and AVStation software, the Samsung could almost be accused of being a notebook aimed at consumers. Certainly, there's little in the way of security - a Kensington slot is the only nod towards safeguarding your hardware and data.

But both this and the extra weight (the Q35 tips the scales at 1.9kg with the 6-cell battery installed) are reflected in the price, which is one of the lowest on test. Yet, this is still an ultraportable notebook - measuring just 299 x 195 x 29mm (WHD) and Windows XP Professional is installed, proving that Samsung wants the Q35 to have its finger in the corporate pie too.

In fact, for the money, there's plenty packed in, including a DVD writer, Wi-Fi, Bluetooth, 10/100 Ethernet and a V.92 modem. Ports, including a PC Card slot, are all sensibly located on the sides and front for easy access. The front-mounted card reader can handle SD and Memory Stick cards. The only port on the rear is the second USB 2 port, and this is the only real sticking point - three or four USB ports would have been nice.

But we're hardly complaining, especially considering that the Q35 is by far the most powerful notebook on test thanks to a Core Duo T2500 CPU. It scored 1.23 in our benchmarks, so if you need plenty of power on the move, the Q35 has it in spades.

And it isn't at the expense of battery life either. With a moderate screen brightness and light use, you can expect the Samsung to last up to almost six hours. If you're working it hard, this will drop to a little under four hours, which is still more than acceptable. A neat touch is the battery's charge indicator which shows the level at the touch of a button.

The 12.1in widescreen TFT has a reflective coating, which may put a turn-off, but thanks to the high brightness, reflections aren't as big a problem as you might expect. Horizontal viewing angles are the widest on test and the resolution of 1,280 x 800 is well suited to this size.

The silver keyboard is also a joy to use, being firm and precise. It would be perfect if it weren't for the transposing of the Fn and Ctrl keys - everything else is where you'd expect it to be. The Fn key offers a decent array of shortcuts for muting audio, enabling Wi-Fi, checking battery level and disabling the touchpad. The touchpad and buttons are among the best examples here, being more comfortable than most. Generally, the chassis is sturdily built although the screen isn't as well protected from knocks as the Lenovo's.

However, yet another bonus at this price is the capacious hard disk which offers 83GB of storage. Not a great deal of software is included, but there's a system recovery utility and a selection from Samsung including Network Manager (for configuring network connections) and EasyBox which ties a selection of common Windows functions together in one place, and even lets you change the boot device priority.

The Q35's sting in the tail is the warranty, which lasts a mere 12 months and places the burden on you to return it to the supplier. But if you can live with this and the lack of security, the Samsung offers good value.

For business users, the Samsung lacks security and is bulkier than most. But, it's great value if these aren't issues - it has good battery life and a great specification.