Well specified for the price 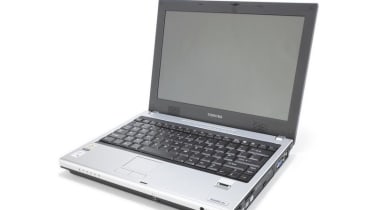 In its graphite and silver chassis, the Toshiba is every bit the serious businessman's notebook. There's no red lid or multimedia software as with the Samsung, the U200 simply gets down to work.

It's one of the chubbier ultraportables on test, weighing in at 1.9kg and with similar dimensions to the Q35. The wider screen bezel accounts for the extra depth, but there's a similar 12.1in glossy TFT. The glossy surface is a slightly odd choice for a business notebook, but the 1,280 x 800 resolution is welcome compared to the Lenovo's 1,024 x 768.

The panel itself is more than bright enough and has relatively good viewing angles. Unusually, the notebook hinges on the screen, rather than the other way around and it only tilts back around 130 degrees - a potentially awkward feature if you want to use a notebook stand with the screen at 180 degrees.

There's no shortage of processing grunt under the hood; the Core Duo T2400 and 1GB of RAM saw to a score of 1.02 in our Office application benchmark. Only the Samsung was appreciably quicker. The Q35 bests the U200 where hard disk space is concerned, although Toshiba is still generous with 75GB of usable capacity.

A dual-layer DVD writer is built in along with Bluetooth, Wi-Fi, a modem and 10/100 Ethernet. Three USB 2 ports are accompanied by mini-FireWire, a PC Card slot, a card reader, headphone and microphone sockets plus a VGA output. One port missing is a docking station interface; there's only an optional USB port replicator, which doesn't have any video outputs.

However, the U200 takes security more seriously as there's a fingerprint reader and a hard disk sensor detects a drop and parks it to avoid damage. Plus, the keyboard is spill resistant should you have an unfortunate accident with your coffee. Still, the Dell is the most secure here with its additional TPM chip and smart card reader.

The chassis is made from magnesium alloy and feels solid enough to withstand life on the road. We like the keyboard's solid feel, but the layout isn't ideal. The Windows key is moved to the top right, while the Enter key is half height and the backslash to the right of the spacebar. All of which means more typos if you switch between a desktop and a notebook regularly.

Above the keyboard is a row of shortcut buttons which let you control music or video playback in Windows Media Player. These (and the glossy screen) are the only nods at multimedia, though, and should prove handy if you're listening to music while you work. The speakers are loud enough, but the harsh, tinny sound will drive you to use the headphone socket.

Toshiba offers a slightly better warranty than Samsung - one years' collect-and-return cover. But, this is poor compared to the three-year warranties seen with other notebooks here. To make matters worse, the U200 doesn't have particularly great battery life. With heavy use, it lasted just over 90 minutes, although this can increase to over four hours if you're not working it hard.

The Samsung and HP both cost the same as the U200. The Q35 is a better choice for battery life and speed, while the HP is the best of the three thanks to its security and warranty at this price.

Good value, but the combination of a short warranty and relatively poor battery life mean the slightly overweight Toshiba is no match for the winners.