IT PRO gets to grips with build 5600, the latest beta of Microsoft's next server release of Windows. 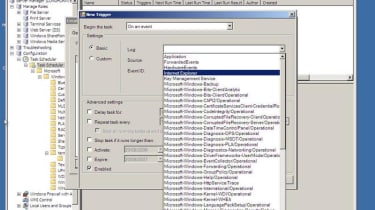 While most people's attention is focused on the impending release of Windows Vista, with release candidate one released earlier this month, the latest build of Microsoft's next Server operating system quietly slipped out of Redmond.

Build 5600 of Windows Server 'Longhorn' is billed as the August Community Technology Preview (CTP), despite arriving in September. Sharing the same build number as Vista RC1 doesn't mean Longhorn Server will ship at the same time as Vista - it's still expected sometime in the summer of 2007 summer. However, build 5600 moves things along in sync with Vista, adding the release candidate for .NET 3.0.

Microsoft has done a lot to simplify setting up Longhorn Server. Once installed, you're presented with a screen of Initial Configuration Tasks. Taking a lesson from Small Business Server 2003, the screen walks you through the initial steps needed to get your server up and running. Vista-style green arrows guide you to the various wizards and dialogue boxes that handle setup. You will need to restart at least once before you finish setup.

If you are already using Windows Server 2003, you won't find Longhorn Server too much of a shock. On the surface there are a lot of similarities - the UI looks much the same, though the start menu is now more Vista-like and adds a search bar. There's a lot of commonality between the Vista and Longhorn code bases, and Vista-like elements pop-up (shorn of Aero) throughout the system. Other obvious changes include a new look to the Explorer. The icons have also been tidied up, and given a dose of the Vista look-and-feel.

Role-based server computing Windows Server 2003 R2 introduced the idea of server roles to Windows. Longhorn Server takes it a step further. The OS you've installed initially is only the base OS, with the bare minimum of features. You'll need to define the server's role before you can do anything else. The Add Roles wizard helps you through this process.

There's a long list of available roles, from Active Directory systems to web servers and deployment managers (along with the familiar file and print). Just tick the boxes for the services you want to install. The wizard handles dependencies, installing the roles needed to support the role you've chose, as well as additional services not on the role list. Additional steps are added to the wizard as you add roles, so you can configure services before installation. In his build though, the installer's dependency model isn't ready for prime time. Installing SharePoint Services on our test machine took three passes before all the components were installed.

By making sure that only core components install by default Microsoft has begun to deliver on its promise of a reduced risk footprint for servers. The ideas behind Longhorn Server's two-stage installation process make a lot of sense, and when it's finished it'll be a time saver. However, it does mean you'll need to plan your server roles in advance. While you can uninstall roles, good planning can keep changes to the minimum.

Additional features: What you need and what you don't Other features can be added directly from the Add Features wizard. These include BitLocker (ideal for locking down branch office servers), clustering tools, a new back-up solution, and Microsoft Message Queuing. You probably won't want to install the Desktop Experience, which adds Media Player and desktop themes to your server. At least it's only an option, and not part of the default install.

There are some interesting touches in Longhorn Server, including the option of a single instance file store. Originally only available in the R2 release of Windows Storage Server 2003, the Windows Single Instance Store scans NTFS streams for duplicate files, and turns them into links to a master copy in a common store. If your users are sharing lots of large documents, this can save considerable amounts of disk space. SIS can also speed up back-ups. We're very dubious about the name Microsoft's given to the service that finds duplicate files though; it's called the Groveler.

Rethinking the web server Internet Information Services also gets a revamp. IIS 7 is a modular web server, with a wide selection of optional components. New management tools make it easier to administer, and if you're porting IIS 6 applications across, a compatibility mode lets you run sites without any changes. The new management console is clearer than Windows Server 2003's MMC snap-in, and gives quick access to key functions using a control panel-like approach. Click on an icon to open a section and make the changes you need.

A key component of Longhorn Server is the Server Manager. A one-stop shop for server management tools, the Server Manager is where you'll manage your servers, defining roles, handling security and networking, as well as storage and backup. Microsoft has done a good job here, bringing all the tools you want into one management console. These include the ability to schedule operations at specific times, with plenty of feedback on just which actions have run and when. Tasks don't need to be given a time to run - they can also be triggered by system events.

Windows Server "Longhorn" is starting to shape up into a credible successor to Windows Server 2003. Improved management tools and a role-based approach to server configuration will help system administrators run their server farms. There's a lot in the August CTP, much of which you won't uncover until you start using it in a wide range of different test scenarios. It's nowhere near a release candidate and it doesn't pretend to be, but if you haven't started evaluating Windows Server "Longhorn" yet, this is a good build for a first look.