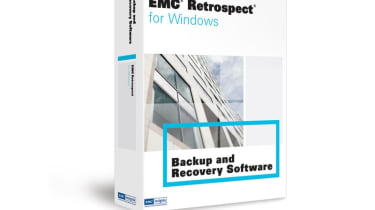 EMC Retrospect 7.5 for Windows is EMC's Disk to Disk to Tape (D2D2T) solution for the small and mid market. The advent of cheap storage and the need for backup has meant a huge explosion in the D2D2T market.

The problem is that most solutions are based around storage appliances. Companies don't want to be buying more appliances when they often have storage that they can reuse. Retrospect is a software solution that allows you to use your existing storage more efficiently.

Retrospect 7.5 comes in four different versions. These determine what comes as standard and what is an optional add-on. The main package we will look at is the Windows Business Edition. There is also Retrospect for Windows Professional, Retrospect Express and Retrospect for Macintosh versions.

What's in the box

Installation itself is a simple, wizard-based process. What was annoying was the need to restart the server at the end of the process. One of the key things that Microsoft has been urging software vendors to do is reduce the number of restarts and as the application doesn't need to be bound to the kernel, there seemed to be no reason to require a restart.

Configuration is simple enough. As long as you can see the device and copy files to it, you can use it. This makes life very simple. You can plug in a USB drive, point to a CD/DVD recorder or attach to a network share. It really is that simple.

You can also configure Retrospect to allow users to restore their own files. This means installing IIS on a server but then makes the backup catalogs searchable by the users to locate the files they need. However, it only works where the backup is stored on a disk rather than on a tape.

From box to starting the first backup took a little under 10 minutes and that including waiting for the server to reboot.

Retrospect is clever in the way it does its backups. Once you have created your first backup it won't backup the same file to the backup set if it hasn't changed. This reduces the backup window massively after the first pass. Until you get used to how simple and fast this is you may find yourself unsure if it has worked.

This solves two huge backup problems for modern organisations. Incremental backups are the most common way of backing up data. A full backup is followed by a series of backups containing just the changes. The problem comes if you need to do a complete restore. A restore requires you to first put back the complete backup and then each incremental backup in the order they were created. With Retrospect, you just restore the backup as it has all the changes integrated into it.

The second big change is that when you have roaming users, they often only backup when they next visit the office. As the amount of data to be backed is small, it can be done from a hotel room over a secure connection. The same is true when mobile users need to restore a file. The web UI means that they can do this on the road.

The web interface will have a significant impact on IT administrators and users by improving the restore time and allowing users to take more responsibility over their own backups.

This is a very nice product, well priced and targeted at the smaller and mid market. However, it will also appeal to organisations who have a lot of users working out of branch offices or who are always on the road.

Well priced and targeted at the smaller and mid market. However, it will also appeal to organisations coping with backups at branch offices and home office locations.