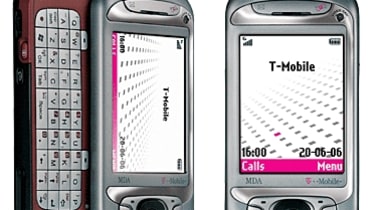 While not delivering the claimed quadruple 3G performance of 1.8 megabits per second data transfer rate across the HSDPA network during our testing, speeds were none too shabby at around 1.2 megabits per second. At least it does offer what can be called realistic broadband speeds, albeit at the lower end of the definition scale, on a mobile phone handset.

This brings us nicely to the first problem that having broadband bandwidth on a mobile handset presents: proper broadband restrictions. Although the T-Mobile 'Web n Walk' plan promises 'unlimited' access with no additional charges to pay, this is not quite as transparent a promise as we would like. A look into the terms and conditions reveals that modem access for computers, internet based video/audio streaming services, peer to peer file sharing, internet based video download and internet based telephony are all banned. While you won't pay any extra if your use of the service spikes as a result of using such services, you can expect your speed to be throttled right down or even find yourself disconnected.

Perhaps the biggest problem with HSDPA is the fact that it isn't yet available everywhere. You do get a quad-band GSM handset supporting GPRS and 3G to fall back on though.

It is a thumb typing experience only it has a tendency to topple over when laid flat and pecked at with fingers; but for email, texting, web surfing and even writing short documents there is little that can beat it considering the size of the device. Equally as impressive is the 2.8" transflective TFT with its native 240 x 320 pixel resolution, being both bright indoors and not suffering as much from sunlight reflectivity outdoors as some devices we've tested, although it could still be better. As, for that matter, could the supplied stylus which at just 83mm fully extended, smooth to the touch and weighing just 4g is not the easiest of input devices to use.

The Samsung SC32442A processor is capable of powering the device along at a respectable 400MHz, and it certainly shows with applications delivering a decent turn of speed. This is somewhat undermined, however, by the 64Mb of SDRAM and 128Mb ROM. In the real world this converts into 52Mb of available storage before you start adding your own applications, which means you will definitely need to supplement the on-board storage with a flash card. The device supports the MicroSD format.

Power is courtesy of a standard min-USB slot which doubles up for PC connectivity.

Wireless connectivity is provided via Bluetooth, Infrared and 802.11g WiFi built-in as well. The latter does take its toll on battery life, of course, but can be easily toggled from the comms manager screen.

Unusually, for a business device, this handset features not one but two cameras. The small front mounted lens being restricted to use during video calling, while the main photography workload is handled by the 2 megapixel camera on the back. This is capable of shooting stills up to 1600 x 1200 pixels, has a basic flash and a manually switched macro mode. Although the jury is still out on the burgundy and grey two-tone colour scheme it has to be said, the addition of a BlackBerry-alike scroll wheel marries form to function

If you prefer you can always use the BlackBerry Connect software included on an accompanying CD anyway. Web browsing is a bit hit and miss, especially when you couple the small screen with Internet Explorer, although installing Opera Mobile helps tremendously. However, even Opera cannot work miracles and you will often find yourself wishing you had got your laptop rather than your smartphone during some serious browsing sessions. The same limitations apply to the business software, Pocket Outlook, Word Mobile, Excel Mobile and PowerPoint Mobile will never be replacements for the real thing, but then they were never intended to be. Just as this is not a laptop replacement, it is something that fills in the gaps nicely when your laptop isn't available.

But it's the little touches that remind you what a joy this handset is to use: the way that sensors pick up when the ambient light level is dropping and turn on the amber backlighting for the keyboard as you start to type; and how the display automatically switches from portrait to landscape as you slide the keyboard section out. Then you are brought back down to earth with a bump by the poor battery life. Expect to get around 4 hours of combined email, browsing and talk time, much less if you have the WiFi toggled on.

Falling awkwardly between being a dedicated business mobile and a feature packed consumer handset, the MDA Vario II remains a serious contender in both camps. If you have a real need for speed in a small package, you'll be hard pressed to find better.