Using blade servers can help you improve both data centre resource utilisation and effectiveness, and IT PRO has exclusively reviewed and tested four of the latest blade server products. 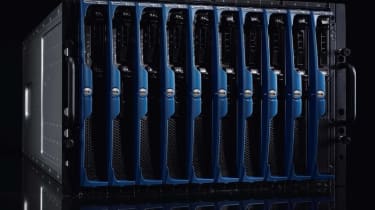 Dell entered the blade server market way back in 2002 with its in-house developed PowerEdge 1655 product which was found lacking in a number of areas and was subsequently quietly withdrawn a couple of years later. Its next move came with the 1855MC which was the result of a collaboration with Fujitsu Siemens as Dell sourced from the same manufacturer. This arrangement continues with the 1955 so Dell's offering is very similar in many ways to the Fujitsu Siemens BX600 S2.

There are no differences with the chassis so you get the same number of blade slots plus power and cooling arrangements. Four expansion slots are provided at the rear and Dell also offers an extensive range of modules. The PowerConnect 5316M switch blade provides sixteen Gigabit ports with ten internal ports linked to the chassis backplane and six presented to the outside world. Two of these allow the blade's dual Gigabit ports to be routed through to different switch modules for redundancy. Two more bays are provided for another pair of PowerConnect 5316M switch blades but to use these you'll need to install an extra dual-port Gigabit Ethernet daughtercard on each server blade.

With Dell's QLogic FC daughtercard installed in the blades you can add Brocade Silkworm 3014 or McDATA 4314 FC switches or a simple FC pass-through module. Dell also offers a TopSpin Infiniband card as well.

The latest blade offerings are far fewer than those available for the BX600 as Dell has only one new server module that supports Series 5000 and 5100 processors. There's room for a couple of hot-swap 2.5in. SAS hard disks at the front and the server has an embedded SAS controller which provides RAID-1 mirroring. No other storage expansion options are currently available as Dell does not offer the same optional SAS and SATA extension modules as Fujitsu Siemens. Its fervent commitment to Intel has also boxed it into a corner as it currently has no Opteron blades whereas HP, IBM and Fujitsu Siemens all offer extensive support with the later capable of delivering a remarkable 16-way Opteron blade.

Installation of the 1955 is fairly straightforward which is just as well as Dell's documentation is truly a mess as you get one generic disk covering every product it's ever made. Consequently, we found it a real pain having to constantly swap through a multitude of manuals when configuring the chassis, the KVM module, the remote management controller, the switch modules and the server blades. As you'd expect, the chassis comes with the same advanced KVM module as the BX600 which provides KVM over IP and a connector for locally attaching a monitor, mouse and keyboard.

Dell's DRAC/MC remote management controller is physically the same as that fitted in the BX600 so you get serial and networks ports for local and remote chassis management. A quick visit to the serial port and CLI is required to assign the module an IP address and then you can move over to its web interface. Note that Dell's base specification comes with one management controller whereas Fujitsu Siemens only offers the BX600 S2 with the extra redundant module as standard.

It may be the same hardware but the web interface for the DRAC/MC is completely different to that offered by Fujitsu Siemens and in our view is not as well designed or as accessible. The home page opens with a chassis summary showing the module and logged in users along with a table displaying the status of each installed module such as power supplies and fans. A sensor log provides operational details on these components and the power budget section keeps you posted on the power draw of the chassis and each server blade.

Power for the chassis and switch blades can be cycled from this interface and you can access individual blades and power them up and down as well. Full remote control sessions allow the server blade and OS to be accessed and virtual floppy and CD-ROM support means it can be booted from an image stored on another system. Power management isn't up to the high standards set by IBM and HP as all you can do is create chassis redundancy policies. These keep power capacity on standby to avoid a chassis failure should a power supply fail. However, there are no tools to directly access the processors for controlling power and heat output.

For general remote access to the server blades Dell bundles its standard OpenManage Suite - the same as supplied with all its PowerEdge servers. Each server blade can be locally and remotely managed using the Server Administrator which offers browser based access and provides plenty of information about motherboard sensors. All operational data is presented in tabular format and you can see the status of the processors, power, hard disks, temperatures and voltages. Alert management allows faults to be linked to actions such as network broadcasts, sending e-mails and running an application.

The IT Assistant targets Dell-centric networks and can manage any of its servers, workstations and laptops running the appropriate agent software. It requires MSDE2000 which is included on the product CD-ROM and uses this to store basic inventory information about each system. An auto-discovery routine scans the network, creates a list of all discovered systems and then polls them regularly to make sure they are available. It provides a comparatively basic range of blade management tools which includes inventory and remote BIOS updates plus you can remotely monitor critical components and link problems with alerts.

If you want full power provisioning and management then you need to look elsewhere as apart from the basic power budgeting available from the DRAC/MC card the 1955 doesn't let you manage blade power consumption to same degree that HP and IBM allows. Software deployment is also conspicuous by its absence with no tools provided for automated installation of operating systems to multiple blades.

There's no denying that if Dell wants to keep up with the competition in the server market it has to have a blade server portfolio. The latest 1955 definitely represents good value but the price you pay is a more limited level of features and expansion options, a smaller server blade choice that doesn't include AMD and more basic management, monitoring and provisioning tools.