WiMax in the UK 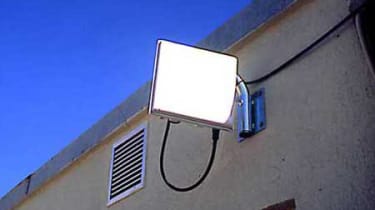 Milton Keynes has become the first major town in the country to benefit from wide area coverage via WiMax wireless broadband technology.

By far the UK's most ambitious WiMax deployment to date, the Milton Keynes roll out will initially provide around 500 businesses and homes with long-range wireless access speeds of up to 10Mbit/s, powered by five base stations.

The project is a collaboration between ISP Pipex and the city's local authority, and if successful will be extended across the whole city.

With all the media coverage that the Milton Keynes project has generated, most of it enthusiastic, this seems like a churlish time to be raising some difficult points about the future of WiMax.

Nonetheless, these are points that must be raised in order to answer some of the questions which are no doubt forming in the minds of many network managers around the country.

The grand plan for WiMax Business users and IT managers will be wondering how much of the hype around WiMax is deserved. They will want some idea of the roadmap, if it exists, for broadening WiMax coverage. They will want to know how it stacks up against alternatives. And they'll want to know more about its limitations, its scalability and its likely cost to them - should it ever become a reality in their area.

Users need to be aware, to start with, just how tentative a stake in the ground the Milton Keynes experiment is. The unspoken implication behind much of the coverage of the MK network is that it's part of a broader plan to saturate the UK with wide area wireless broadband.

There is no such plan. Milton Keynes is a six month trial in part of one city, involving one network operator. If is doesn't work as planned, then who knows what Pipex will do next. If it works, then with the best will in the world, Pipex doesn't have the resources to equip more than a fraction of the rest of the country, so complex is the implementation of a WiMax network.

It's time, I would argue, for everyone to take a step back and adjust their WiMax expectations a little.

"We're a long way from full deployment for all end users - in fact the technology isn't even proven yet," says Paresh Modi UK managing director with iPass, a provider of managed mobile services for business.

He says WiMax is already credible for trunk networks and backhaul, but that it's not so brilliant for the last few hundred metres. "That takes a lot of work, like surveys, which is why WiMax has not taken off yet," he says.

The future for 802.11b and g Meanwhile alternatives march on. "The Cloud and BT are busy with broadening out Wi-Fi, which is well established and works, to much the same end," says Modi. "WiMax works well in some places right now, like trains where there aren't tall buildings to interrupt line of sight."

Then, he says, there's the cost angle: "Intel has committed upwards of $1bn on WiMax so far over the next five years, which it will want back in some form," he points out. "3G, HSDPA and WiMax will all be battling away over the next few months. It will be interesting to see how the cost structures line up. It's all good news for the business consumer, who will get real choice.

Carlton O'Neal, a vice president with Alvarion, one of Intel's partners in developing WiMax takes a more optimistic view of things.

He says of the 180 or so WiMax deployments worldwide incorporating Alvarion products, around a third are pilot projects, a third initial but incomplete developments, and a third full commercial systems.

"We've worked with carriers like BT in rural areas in the UK," he says. "There are lots of small towns in Wales and Scotland with access to WiMax services."

He believes that by now WiMax can be said to have passed its prologue phase: "WiMax is a stream," he says. "In a year it will be a river, and we'll all be saying 'Do you remember when it was just a stream?'"

More on the fence is Andy McKinnon, WiMax principal with Motorola. He advises a realistically cautious perspective.

"It's best to think of WiMax as an alliance of companies rather than a technology," he says. "Don't forget that there are 378 members of the WiMax forum. There's a lot of marketing messages out there, and companies are starting to ask what exactly is for real."

What, I asked him, at the end of the day, will WiMax deliver?

"From a business perspective, companies want to enable home workers, and DSL broadband has enhanced that," he says. "But the problem with existing broadband is uplink. It can take up to 16 times longer to send than to receive something over standard DSL. This is not helping businesses, in fact it's really holding them back."

He says WiMax adds an uplink path, and that WiMax is designed for IP connectivity, whereas DSL is simply adapted for IP.

"As for products, there are now laptops embedded with WiMax," he says. "That'll be 8% of laptops by 2008, estimates InStat. Up until then there will also be PC Cards and desktop modems."

But, he says, there's no one technology that solves all problems - not even WiMax, which is why Motorola and others will continue to support a range of technologies.

Anyone tempted to believe that WiMax holds all the answers ought to wait a while longer - at least for a slightly more convincing poster boy for the technology than a town which thinks putting concrete cows in the fields around it makes it look more rural.