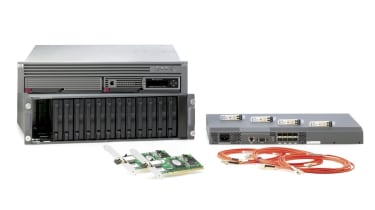 Traditionally the exorbitant prices many vendors charge for fibre channel SAN equipment have precluded all the wealthiest of SMBs from participating. HP is trying to redress this imbalance as its SAN Starter Kits are designed to deliver the benefits of FC SANs to smaller business but at a price they can afford.

The base kit includes an HP Modular Smart Array (MSA) 1500 CS rack chassis with one controller installed, an MSA30 fourteen bay SCSI disk enclosure, a StorageWorks 4/8 FC switch, a quartet of SFP transceivers, a pair of 2Gbps FC HBAs and all required cables.

The MSA1500 has a pair of bays at the front that accept HP's MSA1000 hot-swap controller modules. The base kit includes 256MB of cache memory but our test system had both controllers installed each with the full 512MB onboard. Earlier versions of the controllers only had Ultra160 SCSI chipsets but these have since been updated to Ultra320. Another major improvement is that two controllers can now run in an active-active mode which improves fault tolerance and performance. Previously, they could only function in an active-passive mode where one had to remain on standby. This causes a performance bottleneck as you only have a single 2Gbps FC port to link to the SAN. Now that two active FC ports can be presented we would expect to see a doubling in performance.

Fault tolerance is high on the agenda as the MSA1500 has multiple hot-swap power supplies and fans. The disk enclosures are connected using standard SCSI cables and HP also provided us with its twelve bay MSA20 SATA enclosure. Each SCSI I/O module at the rear has a pair of connectors with one supporting SATA only and the other accepting SCSI enclosures as well. The MSA1500 supports up to four SCSI or eight SATA disk enclosures or a mix of both.

For array management you can use a CLI session over a direct serial connection, HP's Java-based ACU (array configuration utility) or boot a server with the product CD-ROM. To be honest we've never been overly impressed with the method of communication as the ACU has to be run on a system with a physical FC connection to the controller. With an aging but perfectly serviceable QLogic 2310F card installed in one server we could access the disk arrays but the ACU refused to work unless we used an HP certified HBA. Even with the supplied QLogic 2340 HBAs we initially had connection problems and it was only after an on-site support call from HP's very helpful engineers that the problem was resolved.

RAID options are plentiful as although this year many vendors are crowing about support for RAID-6, HP was there a long time before everyone else. The ADG (advance data guarding) feature also uses two different sets of parity data and can survive the loss of two drives. Either way, you simply pick the member disks from the ACU, choose the array type, select hot-standby drives and leave the controller to build it. Arrays can be expanded on the fly so it's easy enough to add new drives and enclosures to existing configurations. HP's SSP (selective storage presentation) provides access controls as you can view all logged in HBAs and decide which can access each logical drive. The controller's cache settings are accessed from here as well so you can decide what percentage should be handed over for read or write operations.

High availability can be added and HP's optional HA bundle includes the second MSA1000 controller, another 4/8 FC switch, four SFP transceivers and two more HBAs. You also get support for Microsoft's MPIO (multi-path I/O) which uses multiple hardware components to create redundant paths to the storage volumes. Essentially, MPIO allows Windows to see the same disk twice - something it doesn't normally like doing. Installed as a device specific module (DSM), MPIO is accessed from the Storage section of the Computer Management tool where you can set it up to perform load balancing.

For performance testing we used a pair of Windows Server 2003 systems each equipped with QLogic 2340 2Gbps FC HBAs. Both controllers and servers were connected to the FC switch and we created a six disk RAID-0 stripe on the MSA30. For comparison purposes we also connected an MSA20 enclosure and created another six-disk stripe using 250GB SATA hard disks. One server was assigned to the SCSI volume and the other was assigned to the LUN comprising SATA drives.

We used the open source Iometer utility configured with two disk workers, 64KB transfer requests and 100 per cent sequential reads. Running the test separately on each server showed a small speed benefit for the SCSI drives with Iometer reporting 186MB/sec whilst the SATA enclosure returned 176MB/sec average throughput. The new active-active mode delivered the goods in the speed stakes as running Iometer simultaneously on both servers returned a cumulative read throughput of 371MB/sec. Running the same test with the controllers configured as active-passive only returned a cumulative 189MB/sec.

With read operations the controller's cache plays a larger part in performance than the hard disks so we upped the pressure by reconfiguring Iometer for 100 per cent writes. We also optimised the cache for a 50-50 spread of read and write operations. With one server in the mix we saw Iometer report a very good throughput of 174MB/sec and with it running on two servers we saw a cumulative speed of 213MB/sec.

We're still not overly keen on the mode of management access but HP's SAN starter kit does look comparatively good value. It offers high levels of storage expansion and excellent fault tolerant features and the improvements to the controller specifications and the new active-active mode have made a significant boost to performance.