Huge surge in amount of spam in October and it looks like it's going to get worse. 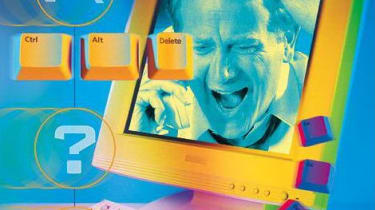 Spam hit almost epidemic proportions in October, with one company seeing spam accounting for up to 96 per cent of email traffic, according to the main email management companies.

According to Postini's analysis of almost 70 billion emails in October, there was a 59 per cent spike in spam, with spam representing 91 per cent of all email, which is a 120 per cent rise in the daily volume of spam over the past 12 months.

Softscan gave similar figures with spam rising sharply to 89.07 per cent, with one weekend in October hitting a record of 96 per cent, however weekend spam figures are always high as there is less business mail. However the trend over the entire month has been much higher than seen in the last couple of months.

MessageLabs saw spam figures hit just 72.9 per cent, however this was an increase of 8.5 per cent on the previous month and the sharpest rise in spam levels since January 2006, when an increase of 9.2 per cent was experienced.

Postini points the finger at the increasing use of hijacked botnets by spammers to initiate attacks. Postini is currently tracking more than one million infected computers that are coordinating spam and virus attacks each day, with 50,000 or more active at any time.

Spammers are also continuously evolving their tactics. Image spam and Microsoft Office document spam now make up as much as 30 per cent of all junk messages, up from two percent in 2005.

Hackers are also using techniques such as re-arranging as many as 25 tiny images into a message in an HTML email, or using animated GIF attachments to dodge optical character recognition technology.

MessageLabs attributes some of the expansion in spam to the latest outbreak of the Warezov virus, which features an aggressive Trojan. The initial strain of Warezov was seen on 14 August, however the most aggressive and virulent batch of variants appeared at midnight on 26 October. MessageLabs seized over 900,000 copies of the virus in the first 24 hours, when tens of thousands of copies of each variant were released in numerous batches. With each batch being different from the previous one, even a few bytes changed in the code allowed the Trojan to pass undetected though traditional anti-virus protection.

MessageLabs expect spam levels to continue to rise during the coming weeks and months as the spammers intensify their efforts around the periods running from US Thanksgiving holiday through to Christmas.