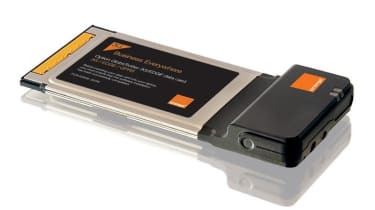 The Orange card, like the Vodafone and T-Mobile cards, experienced problems at installation. If there was any suggestion of another Fusion card having ever been installed on this computer, it wouldn't work at all. There were no error messages given, instead, when you inserted the Orange card it would sometimes find the right drivers and sometimes report the card as unknown although it would always identify it as a Fusion card. The only solution was to go to Add/Remove Software in Control Panel and remove any entries for 3G cards. Even this only partially solved the problem as this still leaves entries in the registry. Expecting a user to go to the registry and clean that up is patently absurd.

Once you do manage to successfully install the drivers and the card, the Orange software is relatively simple and easy to use. You can tell it what applications to open when you start a particular task and can send SMS messages. During setup you do have the option of inserting your Orange Mobile Hotspot account details and it will then use those to find a Hotspot. As we didn't have any account details, we could not test this.

The Orange card performed poorly in these tests and despite trying to get a resolution from technical support during the tests, we were unable to get any connection to Exchange or run the VPN at all. Initially the problems looked like a DNS issue but eventually we were able to find the Exchange server, just unable to log in.

In a post test interview with Orange we were told that we had inadvertently been directed to their consumer not business technical support. They have no experience of the card and couldn't do anything on the day to help us.

Orange admits that there is a problem with anyone trying to use Outlook Web Access if they are not using HTTPS. This problem has been around for a little while but is not on their web pages and should have been easy for any of the technical support teams, consumer or business, to find.

The problem of getting a connection to the VPN is still under investigation. We have ruled out latency as the cause. We have also tried different Orange networks as it appears that depending on what you ask Orange for when you buy the card, depends on whether you are placed on their VPN supporting network. This is something that users buying their own card in order to connect to a business network need to take into account.

During the tests were couldn't find any wireless LAN hotspots. It turned out that this card does not support wireless LAN and you need to enable the built-in wireless LAN card on your laptop, assuming your laptop has one. Then you need to configure the Orange software to find a hotspot. However, it was only when we gained access to a data card specialist who asked us to tell him exactly which version of the card and the serial number off the back that we were able to confirm this.

Having had problems testing Orange in the past, we took particular care to outline what we were doing and how when working with Orange to secure their equipment for the test. To then come across all these problems was a real shock and there was a point where we considered removing the card from the test.

On the upside, the software is easy to use and they were faster than O2.

Futures Orange knows that it has problems with this card and is planning to move to the Sierra Wireless 850, the same card that O2 has adopted. Provided Orange takes the opportunity to then resolve their own network problems over accessing Microsoft Exchange and VPN's, this will give them a solid platform for the future.Conclusion Orange has always been better at marketing itself to the business community than anyone else. It got into the smartphone business early and aggressively chased after business users. Before Orange goes any further into the data card business, however, it needs to address functionality and support issues with its products. This is the third different data card I've tested from Orange and all have been problematic.

Absolutely awful, the worst experience you could possibly get, wait until they change to the Sierra Wireless card next year.