Nokia takes aim at the enterprise

Users are demanding more from their regular phones and smartphones, and market competition is driving innovation. We look at how current market leader Nokia is trying to tackle the fickle business market for its products. 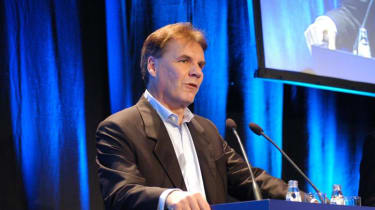 The world's largest mobile phone company knows how to put on a show. Nokia is not only the leading mobile brand, but it is almost certainly the only vendor with its own house band.

The music is rather heavy on Robbie Williams covers, although this did not seem to bother the 2,300 Nokia developers and business partners in Amsterdam this week for the Nokia World conference. And Mr Williams' chorus line, "Let me entertain you", is a good approximation for much of Nokia's strategy.

Chief executive Olli-Pekka Kallasvuo used his keynote speech at the event to point out that Nokia is now competing as much with MP3 player manufactures, such as Apple, and digital camera makers, such as Canon, as with other mobile phone companies.

Kallasvuo, who took over as chief executive from Jorma Ollila in June this year, points out that Nokia is the world's largest maker of MP3 players, and that the company has been shipping music player and FM radio technology in its handsets since 1999.

Doing so makes business sense for Nokia, because by the company's own estimates handset upgrades account for 65 per cent of mobile sales. This is expected to rise to 80 per cent by 2010. Many consumers will pay for a better, more feature-rich handset.

Whether business users pay much heed to features such as better music players or better camera functions is open to question, however. But part of Nokia's strategy is to segment the market, and to develop devices specifically targeted at each user group.

Nokia unveiled no new business devices this week, with consumer devices once more in the limelight. However, for enterprise mobile users who need stability in their upgrade cycles, this might not be a bad thing.

The E Series includes conventional "candy bar" phones such as the E50, the BlackBerry-style E61 and the innovative E70, with a folding out QWERTY keyboard. "The appeal of the range includes the choice of form factors, as well as voice quality, battery life and the range of email applications we support," says Mary McDowell, general manager of Nokia's Enterprise division.

Nokia is also hoping that consistency across the range will appeal to business users and to IT managers. E Series handsets are standardised around QVGA screens, for example, making it easier to write applications for the devices. The E Series phones all run the Series 60 operating system, Nokia's version of Symbian.

Nokia is working on updates to its older, Communicator handsets that will move these devices on to Series 60 as well. In addition, handsets are being equipped with voice over IP software, allowing calls over wireless LANs, as well as with software for office phone systems from Avaya and Alcatel that allows phones such as the E61 to work as cellular "extensions" to the PBX. Such software is also being developed for Cisco equipment.

Research carried out among European CIOs by Nokia found that 40 per cent were looking at "mobilising" their PBX systems. The cost savings on calls, as well as productivity benefits, are significant according to the vendor.

A government department in Spain that has 80 staff using Nokia handsets connected to the PBX instead of separate desk and mobile phones is saving euro8,000 to 9,000 a month, says Ruano Toivonen, Nokia's director of product marketing for enterprise voice solutions. Typically, companies can expect to save between 18 and 28 per cent on telephony costs.

Nokia still has work to do, however, to convince companies that it is as serious about the business market as it is about selling to consumers.

One issue it needs to address is the attitude of operators to its products: the full Nokia range of business phones is not available through every operator in the UK, for example.

If an operator does not stock the right phones, IT managers will have to justify the higher cost of buying SIM-free devices. This could be hard to do when phones with at least nominally similar functions are available with heavy subsidies from other manufacturers.

Nokia already sells a version of the E61 in the US minus its Wi-Fi connection, apparently due to pressure from mobile phone network operators fearing competition and lost revenue from VoIP and low-cost third-party Wi-Fi networks.

The company will also need to speed its development work with Cisco and quite probably, develop compatibility for its phones with Nortel equipment. But the biggest challenge will be to sell its vision for enterprise communications - which is still heavily hardware centric - in as market where software is increasingly important.

That will put Nokia into even more direct competition with Microsoft that, in addition to developing its Windows Mobile operating system, is pushing its Real Time Collaboration server and VoIP solutions in the enterprise market, in part in conjunction with Nortel.

Olli-Pekka Kallasvuo said this week that one of Nokia's objectives is to achieve scale. But gaining the scale needed to take on Microsoft in the enterprise will not be easy, even for a company that has already sold 850m phones.