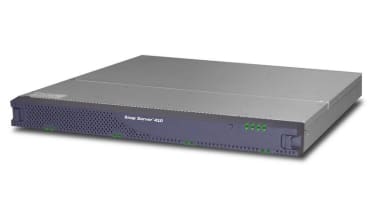 This year has seen Adaptec seriously strengthening its Network Attached Storage (NAS) appliance product range. The end result of this is that the Snap Server family now offers one of the largest storage choices currently on the market. In this exclusive review we take a closer look at the new Snap Server 410 which targets workgroups and small businesses looking for an affordable network storage solution with room to expand.

The 410 is the final piece of the Snap Server jigsaw as Adaptec launched its 500 series of mid-range appliances back in March and followed them up with the entry-level 110 and 210 desktop units a few months later. The 410 enjoys the full benefit of Adaptec's GuardianOS operating system which brings in a good range of features and plenty of optional upgrades.

The 410 is presented in a slim-line 1U rack chassis which delivers a good hardware specification and a spare SO-DIMM slot on the motherboard allows the base memory to be upgraded to a total of 2GB. Storage on the review model is delivered by a quartet of Maxtor SATA/150 hard disks in hot-swap carriers and Adaptec also offers versions with 160GB or 500GB drives instead. Noise pollution is a big issue in small offices and, although it's not something you'd want near your desk, the 410 is reasonably quiet.

Installation is easy enough and there are two options as you can point a web browser at its DHCP assigned IP address or use the bundled Snap Server Manager (SSM) utility which runs a discovery routine on the network. The web interface is easy to navigate with a tidy row of tabbed folders across the top providing easy access to each function.

The 410 is supplied preconfigured with a four disk RAID-5 array but you can delete this and create your own. Once an array has been created it can be split up into multiple volumes and each can have point-in time snapshots assigned although this is an optional feature. Client support is particularly good as the 410 can handle the CIFS/SMB, AFP and NFS protocols allowing Windows, Linux, Unix and Macintosh clients to join in the fun. It'll also function as an FTP server and each protocol can be enabled or disabled individually for each network share. Storage usage can be controlled by implementing quotas on a per volume basis. These can be a simple default value applied to all users or they can be customised for each individual. General access security is good as along with local user and group lists the 410 supports NT and Active Directory domain authentication.

Standard backup features on the basic 410 are limited so you'll need to upgrade using the optional features. The BakBone NetVault software option is expensive but the price does get you five client licenses and a free 500GB virtual tape library. The appliance only runs the NetVault Linux client so you need to install the server component on another system to manage it. The 410 can then be seen as a NetVault client allowing its volumes to be selected and backed up.

The appliance's motherboard also sports a couple of PCI slots for additional SCSI controllers but don't even think about providing your own as the appliance will only work with Adaptec's upgrade card. This is an elderly Ultra2 LSI Logic dual channel card and Adaptec charges a hefty 150 for the privilege.

Nevertheless, with this in place we were able to declare the tape drive to NetVault and remotely run backup jobs that secured data on the appliance directly to the tape drive. Performance was good with the LTO-2 drive returning average backup speeds of 27MB/sec.

Adaptec's Snap EDR (enterprise data replicator) software option makes the Snap Servers stand out from the crowd as this allows appliances in remote locations to have selected shares synchronised with other systems. You can distribute files from one source to multiple locations, aggregate files from multiple appliances to a single location and replicate files and folders between one source and one target. Usefully, Adaptec also offers agents for Windows and Linux systems allowing them to be included in the replication tasks.

iSCSI is becoming increasingly popular at the SMB level of the storage market and the 410 can play in this game as it offers optional support for iSCSI target presentation. Virtual volumes are easy enough to set up but make sure you use a separate volume for them as they cannot be included in snapshots or backed up locally by NetVault. Creating targets is a simple job as you select a volume, enter a capacity for the target and activate CHAP authentication for improved security. Real world performance over iSCSI was impressive with a 691MB video file written to the appliance in 14 seconds for an average speed of 50MB/sec. Reading the file from the appliance took 10 seconds to return an average of nearly 70MB/sec. NAS performance is nothing to sniff at either as copying the same file to and from a standard mapped volume returned write and read speeds of 33MB/sec and 28MB/sec.

Anti-virus measures are also on the options menu and these come courtesy of Computer Associates and its eTrust AntiVirus. This doesn't cost much to activate but no real-time scanning is provided. On-demand scans can be scheduled at regular intervals and this is achieved from the separate eTrust interface that is fired up automatically from the main management console.

The small business NAS market is awash with compact appliances and if storage capacity and a low outlay are a high priority then desktop boxes such as those from Infrant Technologies, Buffalo Technologies or Thecus will probably do the job. However, for its quality list of business level features, good performance and extensive range of optional upgrades the Snap Server 410 is going to be a tough customer to beat.

You do pay a premium for the privilege but the Snap Server 410 delivers a high level of business related storage features along with good overall performance and a host of optional extras.