Getting started with Gigabit Ethernet

Simon Bisson unplugs his old 100 megabit switches and gets ready for a high speed network. 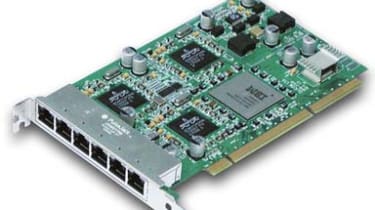 Gigabit networking hardware is getting cheaper, so much cheaper that gigabit network cards are now standard in many desktop PCs and servers. Used as a server room technology in the past, it is now ready for the desktop and the small business. If you're already running a 100Base-T or even 10Base-T -network, you may be closer to moving to gigabit than you might think.

So why use gigabit? Well, with cheap Network Attached Storage (NAS) appliances you can use it to rethink your storage strategy. Why use tape for backup when you can copy your files far faster to a NAS RAID array with fast SATA disks? Tiered storage becomes easier to operate and run when data transfers in minutes rather than hours. It will also allow your users to work with large amounts of remote data more effectively, and with Microsoft rolling out a server hosted version of Excel as part of 2007 Office, moving around large data sets will become a necessity.

Gigabit networks will also help you manage virtualised infrastructures, and handle the deployment of next generation operating systems. Image-based installs can be pushed out quickly, and machines can be reconfigured and updated on the fly. The time saved can be considerable, as network speed is a major bottleneck in file transfers.

Most networks run at 10 or 100Mb/s. Gigabit Ethernet, described by the IEEE's 802.3 standard is ten times faster, running at a zippy 1000Mb/s. There are several gigabit Ethernet standards, designed for different cable types, including fibre optics. The most commonly used version is 802.3ab, often called 1000Base-T, which uses the same cable and connector types as the familiar 10Base-T and 100Base-T networks. This means that you're subject to the same length limits as 100Base-T - with a maximum segment length of 100m. In practice most offices won't find this a limitation.

Underlying Infrastructure You can use an existing Category 5 Ethernet cabling infrastructure for gigabit. But you need to make sure that all four pairs in the cable are connected. 100Base-T only requires two pairs, and often the unused pairs won't have been connected. Most 1000Base-T switches and network cards will drop back to 100Mb/s connections if only two pairs are connected, so you won't be getting the bang for your bucks. A good cable tester will show if your cabling will handle 1000Base-T gigabit operations.

Upgrading to Category 5e or Category 6 cabling will avoid this problem. One thing to note is that 1000Base-T is far less tolerant of installation problems than 100base-T. A happily running 100Base-T network may well not run at 1000Base-T with out significant reworking.

If you do need to upgrade your network, look for Cat 5e cabling - you'll find it for around 45 for more than 300 metres at networking vendors like Wadsworths. This will give you better high frequency response, without breaking the bank. Cat 6 is a more expensive alternative, at around 70 for 300 metres, with a 200MHz bandwidth, twice Cat 5 and Cat 5e's 100MHz. Using Cat 6 cabling for 1000Baset-T gigabit will give you an upgrade path to 10 gigabit (10000Mb/s) operations, but it is overkill for most SME installations.

Gigabit switch prices have dropped recently, an eight port unmanaged gigabit Ethernet switch will cost around 60. While managed switches are an ideal tool for large networks, where traffic and VLANs need managing, a new generation of "smart switches" from vendors like D-Link can give smaller networks access to features that previously required a dedicated network administrator - for around 10 a port (for the 24-port DGS-1224T). Web-based interfaces and scenario-driven wizards make it easier to define and manage VLANs, and also to implement traffic management schemes and quality of service.

Configuration and management No matter which switch type you use, any configuration changes will need to be documented. Network switches are a critical component of your business infrastructure, and configurations should be part of a change management system. Smaller networks can take advantage of budget unmanaged switches. If you just want to connect your hardware together, and aren't interested in complex network management schemes, then an unmanaged switch is a good, low-cost alternative.

Static gigabit links can be aggregated to provide additional bandwidth (at the expense of switch ports). Linked ports function as a single, very high bandwidth, channel. You can use this approach to provide inter-floor connectivity, or to improve the connectivity between data centre racks (perhaps linking applications servers to storage servers or a backup VLAN).

So what equipment can you connect to your new, faster network? Many servers now come with 10/100/1000 megabit NICs. PCI and PCI Express variants are available, along with 32-bit and 64-bit drivers. Many notebooks only have 10/100 megabit NICs, though Apple has been adding gigabit connectivity to its high-end notebooks and notebooks PCs designed for business users will have gigabit ports. You're unlikely to find any WiFi access points with gigabit capability, but as 802.11g wireless networks peak at 54Mb/s, gigabit connections to wired networks aren't really necessary. Gigabit will speed up storage connections, and SME NAS appliances like the Buffalo Terastation Pro (and even consumer-friendly devices like Iomega's StorCenter NAS) already support 1000Base-T.

Managing the switch from 100Base-T to 1000Base-T needn't be complex - or expensive. Take it step by step, keep an eye on the cabling, and pretty soon you'll be putting the go-faster stripes on the sides of your PCs and servers.