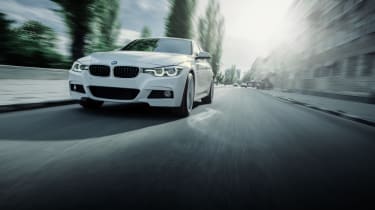 BMW has been locked in a process of reshaping its IT strategy for just over a year following its decision to abandon the Waterfall model of software development, in favour of becoming '100% agile'.

Agile is fast-becoming the most popular model of software development, revolutionising the way companies and organisations build applications. Agile differs from the traditional waterfall method in that products are finished and pushed out as quickly as possible, supported by frequent minor changes rather than large dispersed patches.

The car giant says that it has learned above all else there's no silver bullet to tackling this transition, and that each organisation must find their own way based on their existing infrastructure and the configuration of their teams.

Changes in the wider market and increasing demand from customers for new features to be delivered more frequently forced the company to change its approach to IT, according to BMW's vice president of IT delivery Ralf Waltram. 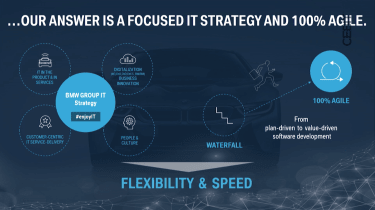 As Waltram puts it: "We want to get flexibility in delivering software, trying new things out fast, to learn very fast, and gain speed".

You can go your own way

There were a plethora of models from which to choose, as well as books and YouTube tutorials at his disposal. He even turned to the likes of Microsoft and Spotify to attempt to mirror their own approaches to agile. However, he soon realised that BMW couldn't rely on a tried-and-tested method; instead, his company needed a bespoke methodology of its own.

"The success of our agile transformation is highly dependent on the right adoption of the agile models," says Waltram. "There are so many different models out there. Yes, you can buy a book, or you hire a good advisor from outside, but we believe that you need to find your own way on how to become Agile.

"Your team is different than my team, and your legacy infrastructure is different, the technology you're using is different, so really the key takeaway from my side is find your own way and learn by yourself."

Process, for instance, involved researching the best way to approach adopting agile development, while attempts to overhauling the development structure were driven by a need to overcome the inherent inefficiencies of BMW's agile and non-agile teams working in tandem.

The incompatibility of the two team types frequently resulted in delays to ongoing projects, which BMW have since tried to rectify, in-part, by implementing a full DevOps organisation structure from last year, as part of its ongoing process to become fully agile.

On how technology played a part in BMW's transition, Waltram said the key was investing in the right architecture and innovation, including cloud services. He said that BMW was currently focused on delivering an Agile Toolchain, a coding workplace, a microservice-based architecture, and having everything cloud-enabled.

The Agile Toolchain, BMW's backbone for software development, involves a defined process - organised somewhat like a flowchart - which the company believes its employees will be able to easily follow. 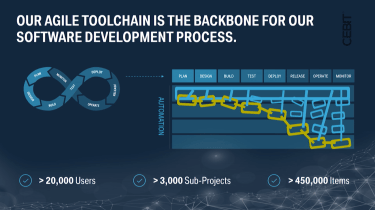 It begins with planning, before shifting focus to the design, build, test, deploy, release, operate and monitor stages - into which the company hopes all projects and users will eventually work under.

Last June, when BMW began transforming its approach to software development, 8,000 users were on its Toolchain. Today, some 20,000 are following the model, which is also supporting more than 3,000 sub-projects, and 450,000 items.

Finally, promoting qualities such as transparency, openness and trust, were essential in altering the company's culture to embrace Agile development. This shift in attitude took place at the very highest level of the company, with execs affording a healthier degree of freedom and autonomy to its teams, as well as bringing all of BMW's coding in-house.

The proof is in the pudding

This adoption has led to improvements in the way BMW handles the development of products, and has helped significantly reduce the time to market - perhaps best demonstrated in the company's new approach to interior design.

Historically, Waltram's small in-house R&D team would work using physical mockups of car interiors only twice a year. Under the new approach, his team is now using software to visualise mockups in a 3D game engine, allowing for new integrations every week. 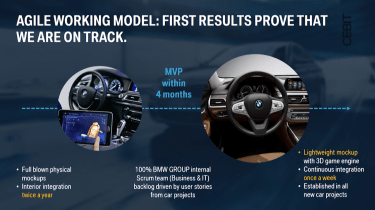 Waltram explains that where it would normally take four months to come up with initial concept designs, tests under an agile approach were producing viable complete products within the same time frame.

"[In a Waterfall world] it's not possible in four months - definitely not. And this is so exciting, if you can see the way the new process is working, and we have our first results here," he says.

"But to be honest to you, for sure... you will also encounter in agile projects or products that you have problems; you have to tackle problems. The good thing is you find them more faster, in a more iterative way." 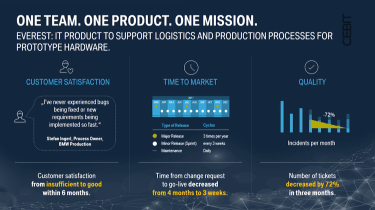 Everest, BMW's SAP system that handles the logistics and production processes for prototype hardware, was a project blighted with inefficiencies and bugs. In bringing several teams together, he managed to resolve a series of the biggest problems in three months - quickening Everest's release cycle from twice a year to three times a year, plus sprint releases every three weeks, while recording a 72% reduction in bugs and incidents.

But its IT chief was keen to stress, despite the progress made, the company still had a great distance to cover and that its journey would never end.

"It's a journey. We're not done here; we're not even getting started. We did pilots, we are currently doing the ramp-up, we are collecting our Agile working model together, we will go into scaling into all of our products, and it will never be over, this transformation."