Cloud too expensive for the "vast majority", claims Zuckerberg 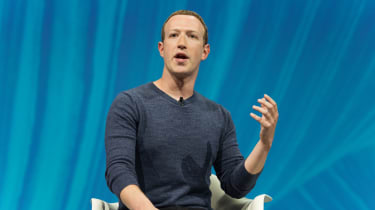 Mark Zuckerberg has questioned the cost of cloud computing and storage during a discussion about bio sequencing.

The Facebook founder specifically referenced AWS, joking "let's call up Jeff and talk about this".

Zuckerberg and his wife Pricilla Chan set up the Chan Zuckerberg Initiative (CZI) in 2015 to find ways of using technology to advance health, social and scientific research.

In a chat between the research centre's co-presidents Dr Joseph DeRisi and Dr Stephen Quake, moderated by Zuckerberg live on YouTube, the group argued that progress in initiatives is often blocked by the exorbitant cost of cloud subscriptions.

"In our bio board meetings, one of the things we talk about is the cost of the compute, and our AWS bill, for example, is one of the specific points," Zuckerberg said. "Let's call up Jeff and talk about this."

"It's interesting, the bottleneck for progress, in medical research at this point, a lot of the cost for it, is on compute and the data side and not strictly on the wet labs or how long it takes to turn around experiments."

The CZI is part-funded by billions of dollars from Facebook and also investment from LinkedIn co-founder Reid Hoffman.

However, Dr Quake noted that most other organisations and research labs around the world are unable to secure this level of funding, and are therefore hamstrung by the price of cloud.

"This is no more apparent than in the developing world or low-income resource settings," He said. "The cost of the sequencing and the lab work has gotten to the point where you can do this almost anywhere in the world. It's gotten that cheap."

"The compute to be able to analyse that data is unfortunately not available to the vast majority of the people that do that. It's very often the case that you'll go to one of these low-income resource settings, they'll have a sequencer but its collecting dust because they can't compute. Even if they can access the cloud, they can't afford it."

According to Synergy Research Group, the cloud market is heading for a world-wide revenue run rate of $100 billion per year. The big providers have capitalised on digital transformations and the need to store and analyse data with AWS consistently at the top of the market.

Companies like Microsoft, Google, IBM, Alibaba and Oracle are all competing for the rest of the market. This is no more apparent than in the race to provide the Pentagon with cloud computing services. Amazon's cloud arm was set to be the winners of the $10 billion JEDI contract but after complaints made by Oracle and IBM, the decision has been put on hold.