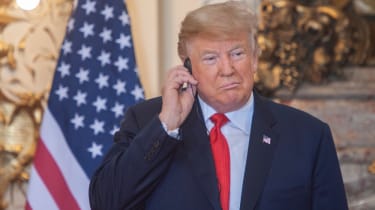 The cloud giant has said it intends to appeal the Department of Defence's decision to award the contract to Microsoft.

The Joint Enterprise Defence Infrastructure (JEDI) contract is a ¢10 billion project to modernise the Pentagon's IT systems. Major cloud computing companies such as IBM, Oracle, Google and AWS were involved in a controversial bidding process with Microsoft announced as the eventual winner in October.

This didn't go down well with Amazon's cloud computing arm which initially said it was "surprised" with the decision and is now challenging it.

"AWS is uniquely experienced and qualified to provide the critical technology the US military needs and remains committed to supporting the DoD's modernisation efforts," an AWS spokesperson said.

"We also believe it's critical for our country that the government and its elected leaders administer procurements objectively and in a manner that is free from political influence. Numerous aspects of the JEDI evaluation process contained clear deficiencies, errors, and unmistakable bias and it's important that these matters be examined and rectified."

Donald Trump called his Pentagon Secretary James Mattis and directed him to "screw Amazon" out of a chance to bid on the JEDI contract, according to Mattis' book 'Holding The Line: Inside Trump's Pentagon with Secretary Mattis'. It was written by Guy Snodgrass, who served as a speechwriter for Mattis, and reports of the quote surfaced around the time Microsoft was awarded the JEDI contract.

Trump and Amazon CEO Jeff Bezos have a famous disliking for one another and there was already a suggestion that this had influenced the DoD's final decision. In July the president became "concerned" with how the bidding was going after complaints other cloud providers were being unfairly excluded - AWS was the favourite at the time.

Oracle is also taking legal action against the DoD's final decision, however, its argument is actually against AWS. It claims that two DoD officials were offered jobs at Amazon while they worked on the JEDI contract and that another was a former AWS consultant.

US Defence Secretary Mark Esper rejected any suggestion of bias. According to Reuters, he told a news conference in Seoul: "I am confident it was conducted freely and fairly, without any type of outside influence."

Esper removed himself from reviewing the deal in October as his son was employed by IBM.