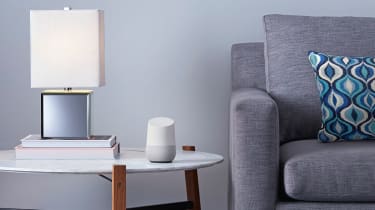 The jug-sized Google Home will have a customisable base with a choice of different colours and finishes from metal to fabric. Similar to Google Now, you'll be able to use Google Home to control music playback and control streaming video playback on a linked TV thanks to built-in support for the familiar Google Cast protocol introduced in the Chromecast. You can ask questions and get answers, culled from Google search results of course, in a conversational back-and-forth format. 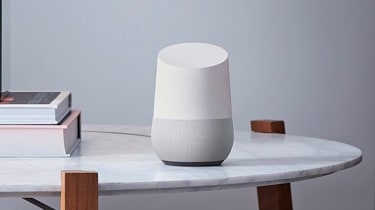 You can of course use Google Home to add to and manage your to do lists, reminders, calendar and timers. Naturally, it will recognise the voices of multiple people. It will also integrate with popular' smart home IoT systems, starting with the Google-owned Nest of course - but this feature is set for the future and won't be available at Home's launch.

Google hasn't set a precise launch date or price, only saying that it will arrive later this year'. Even so, this throws down the gauntlet to Amazon, which has yet to sell its Echo personal assistant outside the US, and Facebook which is currently trialling a similar conversational artificial intelligence in Facebook Messenger.

Google is reportedly planning to launch a smart home assistant, to compete with the Amazon Echo, at the Google I/O developer conference later today.

The device will be known as Google Home and will be available this autumn, said anonymous sources speaking to the New York Times.

Google Home will be primarily designed to answer questions and perform 'smart home' tasks, and its primary competition will be the Amazon Echo.

The Amazon Echo has become an unlikely success in the home automation sphere, selling around three million units since its release in 2014.

The device is controlled by an AI software core known as 'Alexa' and powered by AWS' cloud computing platform.

Alexa can link to various third-party services and hardware to perform tasks like ordering an Uber, answering questions from Wikipedia, or controlling lights and thermostats.

However, while the Echo has been remarkably successful, Google is in an excellent position to supercede it.

Effectively, Google Home can be expected to act as a standalone version of Google Now, Android's contextual digital assistant.

Users will be able to check their schedule via Google Calendar, play music through services like Spotify, and perform any number of actions through third-party integrations.

Thanks to its acquisition of Nest, the company also has strong integrations with many smart home and Internet of Things products.

Thanks to smart diversification across many areas, Google now has one of the strongest ecosystems around, and Google Home could be the final piece of the puzzle.

17/05/2016:Google rolls out Cardboard support for YouTube on iOS

Google has just rolled out YouTube support for Google Cardboard on iOS, bringing full-scale mobile VR to iOS for the first time.

iPhone users have had the ability watch 360-degree videos on the platform since last year, but now they can use Google's cheap mobile viewer to experience 360 content in virtual reality.

Cardboard can also be used to watch regular YouTube videos, which display in a 'virtual theater' to let users feel like they're watching them on a big screen.

The news follows rumours that the company's Google I/O developer conference will see a new version of Google Cardboard, as well as a standalone 'Android VR' headset that will not need a smartphone to power it.

Google will be unveiling a standalone 'Android VR' headset at its I/O developer conference later this month, it has been claimed.

The rumours come from Engadget and Gizmodo founder Peter Rojas, who tweeted that a standalone headset would "definitely be announced next week".

This coincides neatly with the dates of Google's annual conference, which will run from 18-20 May in Mountain View, California. According to Rojas, the new device will be "better than Gear VR, [but] not as good as [the Oculus] Rift [and the HTC] Vive".

Rojas also claimed that the headset would be markedly different to the current VR products on offer. Unlike the HTC Vive and the Oculus Rift, Android VR will not be connected to a PC, but will be entirely self-contained.

However, it will also differ from Android's existing mobile VR products like Google Cardboard and the Gear VR, in that it won't require a smartphone to act as the main display.

Samsung has also confirmed it is working on a VR headset that doesn't require tethering to a phone or PC, so the new device could be a partnership between the two.

The rumours are lent more credibility by the appearance in the latest Unreal Engine 4 preview of a reference to "engine changes in support of Android VR", a reference that was swiftly changed once discovered.

Google is also expected to launch an updated version of its Google Cardboard headset at the conference, after releasing the original in the UK for the first time this week.

Google's annual developer conference, Google I/O, will take place between 18-20 May this year, the company has confirmed.

It will be the 10th time Google has put on the event, and this year's show will be hosted at the Shoreline Amphitheatre in Mountain View, in San Francisco, said CEO Sundar Pichai.

He tweeted: "I/O'16 coming to neighborhood where it all started 10 yrs ago". 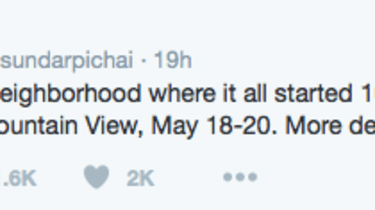 Developers unable to attend should be able to stream the show online, with the event typically discussing major Android updates.

Last year, Google used the event to officially unveil Android M (now Android Marshmallow), boasting that it had solved "thousands of bugs" in the latest iteration of the operating system.

Other possible topics could include Google's self-driving car project, and its wearable, Android Wear.

With many other manufacturers also developing driverless car technology, Google will be keen to show it is ahead of the curve.

It has been in talks with the UK government for two years about the potential of the tech, but its prototype also nearly collided with another autonomous vehicle, created by Delphi, last summer.

Today, Google revealed that human drivers have had to take control of its fleet of driverless cars 341 times over 14 months to avoid accidents and counteract software problems.

Between September 2014 and November 2015, human drivers have intervened 13 times to prevent a crash, and another 69 times to prevent dangerous driving, according to the firm's filing with California's Department of Motor Vehicles.

Google also confirmed last year that it is developing an iOS app for Android Wear, allowing people to use the smartwatch with their iPhone.

In a blog post announcing the move in September 2015, David Singleton, director of engineering for Android Wear, said: "When you wear something every day, you want to be sure it really works for you. That's why Android Wear offers countless design choices, so you can find the watch that fits your style.

"With Android Wear you can do all of that. And now, Android watches work with iPhones."