OnePlus has officially confirmed that the Nougat update will not be delivered to the OnePlus 2.

OnePlus toldAndroid Authoritythat "customer service has been telling customers this for a little while" and that "we're happy about what we're doing with software. We already confirmed Android O will come for the OnePlus 3 and 3T. So [no Nougat for the OnePlus 2] isn't new and we think people were aware of it".

When asked why the OnePlus 2 would not receive the update, the company said it was because "when we built the OnePlus 2 we didn't have the software infrastructure team in place we do now".

Presumably this means that OnePlus 2 users will have to be happy using Android Marshmallow, which may be a bit of a surprise for users: in a forum on the company's website, a moderator from OnePlus hadpreviously claimedthat the device was going to get the update, although clearly that's no longer the case.

A lot of you have been asking, so I'm proud to say Android O will come to OnePlus 3 and 3T.

OnePlus CEO Pete Lau recently said that the company's One Plus 3 and 3T will support Android O which will make some users very happy.

Lenovo has unveiled a pair of Nougat loaded budget smartphones, theMoto C and Moto C Plus.

Both are expected to retail for less than100 despite packing the most recent Android OS - though a new version is set to arrive soon. The Moto C comes in a 3G only or 4G version, with a 5in display. The 3G model, featuring 8GB of storage, costs just89, while you'll pay10 more for 4G, and more still to bump up the storage to 16GB.

There is support for microSD, too. The Moto C Plus comes in the same 5in package but has a higher resolution, battery and processor, with 16GB of storage for119. Launch date in the UK hasn't yet been revealed, but are expected later this spring.

Another fresh Nougat phone is the Huawei Y7, unveiled this week with a 4,000mAh battery and dual-SIM support. The 5.5in handset runs an octa-core Snapdragon 435 processor and features a 12-megapixel rear camera and 8-megapixel front facing snapper. Its version of Android Nougat is layered with a Huawei customised UI.

Google is set to reveal more about its next mobile OS, Android O,at its I/O developer conference this week, but some older phones are only just getting Android Nougat.That includes the Asus ZenFone lineup, with the ZenFone 3 Deluxe and ZenFone 3 Maxupdated to Nougat 7.1.1, while the HTC One M9 in the US on AT&T isalso finally getting Nougat, but only Android 7.0 and not the updated Android 7.1.

The update is currently only being rolled out for certain Nexus and Pixel models, specifically the Pixel, Pixel XL, Pixel C, Nexus 5X and Nexus Player.

According toArs Technica, the Pixel C will benefit the most from the update. It'll treat the tablet like a real Pixel device, supplying it with the Pixel launcher, blue settings app, and Pixel's trademark white navigation buttons. It'll also feature a new tablet-specific design grid for its app screen.

The new update also addresses a number of issues associated with the Pixel and Pixel XL, such as an audio-popping issue and pink bands appearing on camera screens.It can be considered only a minor change for the remaining eligible devices, although the changes that come with it will differ from one device to the next

Pixel and Nexus devices will both also get battery usage alerts, which lets a user know when certain apps are using too much of the device's power.

Google is trying to downgrade Nexus 6 users currently on Android 7.1.1, according to angry customers posting onReddit.

The tech giant is reportedly trying to force those users back down to Android 7.0 via an over-the-air update that causes their apps to continually crash, reportsAndroidPolice.

The crashes are because usually to downgrade, users need to reset their devices - a process the downgrade update doesn't account for, if Redditors are correct.

Google stopped issuing updates for the Nexus 6 once the phone hit end-of-life last October, but later issued the 7.1.1 upgrade, then pulled it due to issues it had around Android Pay and SafetyNet, reports9to5Google.Those issues were resolved for the Nexus 6 in a March security update.

A Google community manager responded to the Reddit users, saying: "There was a recent OTA update for Android 7.0 that is causing confusion for some Nexus 6 users. For those of you that want to guarantee future OTA updates, you will need to get back on the 7.0 supported track. If you are experiencing issues after accepting the 7.0 update, please factory reset your device to help resolve any problems.

"For any Nexus 6 users that want to continue flashing/sideloading future builds, you can stay on 7.1.1 and continue to do so."

13/03/2017:One of the main advantages Android has over iOS is its in-depth customisation options, but for some users, there's almost too much choice. Thankfully, Google is here to help, with a new tool designed to help people tweak exactly what they want their Android UI to look like.

The#myAndroid Taste Testis a Cosmo-style multiple-choice quiz, where users pick between options like 'monochromatic' and 'multicolour', or 'realistic' and 'abstract'. They are also asked to select priorities like news, gaming, music and weather. 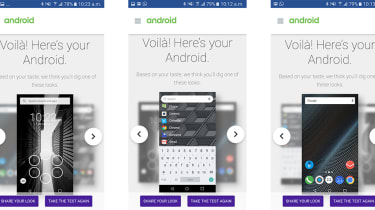 Once you've completed the quiz, Google will suggest three potential 'looks' for your devices, which are made up of a wallpaper, an icon pack, a launcher, a keyboard and home screen widgets, all of which can be individually downloaded via links on the page.

For veteran Android users, this is likely to be little more than a fun way to come up with some new ideas. For Android novices, however, this could open up a whole new world of smartphone customisation.

Android Nougat has been delayed for Samsung's Galaxy S6 and S6 Edge, according to the manufacturer's UK's Twitter account.

It revealed that the firm is reviewing the quality of the firmware, but gave no concrete date for when it will be officially released.

While the latest Android version will be released "at the earliest opportunity", it means S6 users will be left unable to enjoy the features available on the newest Android OS for the time being.

The software update for the Samsung Galaxy S6 and S6 Edge has been delayed while we review its quality. 1/3

The new software version will be made available at the earliest opportunity. 2/3

Samsung remains committed to providing the highest quality software and apologises for the delay. 3/3 ^CW

Those include support for multiple windows, letting users view various apps on one display, and the ability to bundle notifications from one app together, making them easier to parse.

Nougat is also intended to make your phone more efficient by expanding on Doze, originally a Marshmallow feature that restricts battery use when your device is stationary.

However, Nougat has evolved Doze to work on phones that are inactive for a period of time, stopping apps draining your battery while your phone is in your pocket, for example.

27/02/2017:Google has begun rolling out its Google Assistant feature for Android to devices running pure versions of Nougat and Marshmallow, starting this week with English speakers in the US. English speakers residing in Australia, Canada and the United Kingdom and German speakers in Germany will follow. More languages and geographies will be added over the course of the year.

The personal assistant helps users keep their lives in check with a single starter command - OK, Google - enabling them to find the answer to many questions they've always sought the answer to, take a photo, get directions, ask for the translation of a phrase, check the weather or operate all of their smart devices with their voice. Once the roll-out is complete, it will be available on around 32% of Android devices.

The conversational search and AI-based Google Assistant gets more intelligent the more it's used, ensuring the results that are returned are always what the user is looking for. In terms of language offerings, only English and German are currently supported, but it will be getting a wider range of supported languages over the next year, Google Assist's product lead, Gummi Hafsteinsson,said in a blog post.

"Our goal is to make the Assistant available anywhere you need it,"Hafsteinsson said. "It came to Android Wear 2.0 via new smartwatches just a few weeks ago and,as we previewedin January, the Assistant is also coming to TVs and cars. With this update, hundreds of millions of Android users will now be able to try out the Google Assistant."

Android Marshmallow is currently running on just under 31% of Android smartphones, while Nougat is installed on 1.2%, although it's likely Nougat will be launching on more devices very soon, with Mobile World Congress kicking off this week in Barcelona.