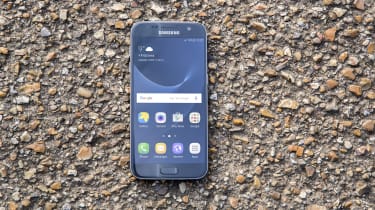 The S7 looks very similar to the S6 with its glass-backed casing rimmed by metal, a far cry from the super-sleek Samsung Galaxy S8 and rumoured Samsung Galaxy S9, with their edge-to-edge, curved screens adorning the front of the device. That doesn't mean it's unattractive, but as is the case with the iPhone 8, it's the last example of old-fashioned smartphone design.

Screen aside, the Samsung Galaxy S7 is available in a variety of colours - the black colouring of our review unit had an attractive pearlescent sheen that sets it apart from other smartphones.

Despite the use of glass, it didn't feel slippery. Some faint scratches accumulated on the screen and fingerprint reader, but these were only visible if we looked out for them under the right lighting. Small scratches on the fingerprint reader were more noticeable.

Samsung upgraded the glass in its Galaxy S8 to Corning's Gorilla Glass 5, from its fourth generation panel, which is said to increase its likelihood of breaking if the device is dropped from a height. It's likely the Samsung Galaxy S9 will include this same version too, making them both more robust than the Samsung Galaxy S7. 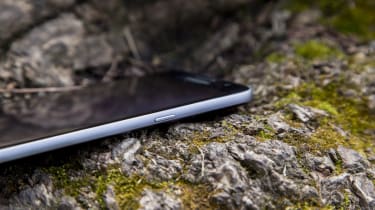 While the S7's screen is completely flat unlike its gently sloping counterpart the S7 Edge, the rear of phone is curved at the edges. It's very similar to the curved back of the Galaxy Note 5 and while we were initially sceptical of its value, we came to appreciate this subtle design touch. It narrowed the girth of this 5.1in phone just enough to make it more comfortable to hold and use single-handed than other similarly sized phones.

While the S7 lacks the edge-to-edge 'Infinity Display' that makes the S8 and S9 so appealing, it remains an excellent-looking phone. We prefer the S7 Edge's distinctive curved display, but the regular S7 is still plenty sleek and stylish.

Like the Sony Xperia Z5 range, but unlike the S6 and many other competing Android flagship phones, the S7 is waterproof. It's rated to survive immersion in water of depths no lower than 1.5m for no more than 30 minutes. It survived a half hour dunking in our kitchen sink unscathed, so it should have no trouble with rain, puddles or spilled pints. Of course, it's best to ensure the flap-free ports are fully dried out before plugging anything in.

There are no surprises when it comes to the S7's Super AMOLED screen. It has spot-on colour accuracy and contrast, plus text is pin sharp thanks to the 2,560 x 1,440 QHD resolution. The screen can temporarily boost its already high brightness when outdoors so it's still readable in bright sunlight. 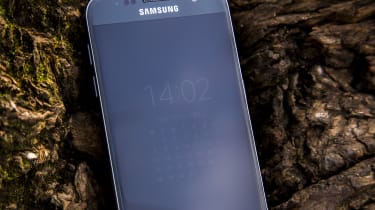 The screen has an always-on' mode so it can display basic information even when asleep, such as the date, time and battery charge. Nokia/Microsoft and Motorola smartphones have had a similar feature for years. It's nice to have and didn't noticeably deplete battery life, but is hardly essential.