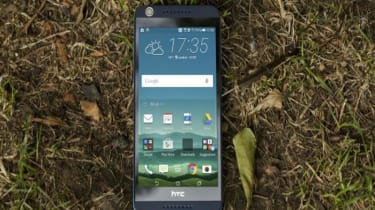 One area HTC has always shone is creating easy-to-use and attractive mid-range smartphones. They may not be as impressive as the iPhone, nor as high-tech as Sony Android devices, but they look very good and run pretty well too.

The HTC Desire 626, launched in September 2015, doesn't buck this trend - at least in the attractiveness stakes . It features a 5in, 1,280x720 pixel resolution display on the front of its sleek chassis. The display is brighter than on the HTC Desire 620, which means it's probably seen a jump in display panel quality, but it's still not as crisp and bright as some of its competitors such as the Moto G.

Add in a sunny environment and you're pretty much resigned to squinting to see the screen, even if you've opted for the auto-brightness setting, making it a much better device suited to the doom and gloom of winter.

Looks-wise, the Desire 626 is no HTC One M10, but it's damn fine for a mid-ranger. There's a chrome bezel around the outside, a speaker at the top and bottom and a soft touch rear, which feels tactile beneath the fingertips. The choice of the materials though, despite feeling premium enough, attract fingerprints, smudges and dirt, which takes away from the sleek design overall.

Where things do start to get a little more interesting is the HTC Desire 626's software. It's the first mid-range device to include the Sense 7 interface that first shipped with the flagship HTC One M9, making it beautiful inside and out.

Running on Android 5.1 Lollipop, Sense 7 makes customisation a breeze, allowing you to make exactly what you like of the HTC Desire 626's home screen and, in fact, entire interface. You can buy one of the themes in the Theme store or use your own photos and tweak the colour scheme to match.

Sense 7 also gives you the opportunity to add additional shortcut buttons, so if you want to quickly access the settings menu, set the screen to auto rotate or hide the navigation bar with one click, add a shortcut to make things easier for yourself.

Sense Home will learn which apps you use most often and show them first, before you see any other apps, making it quicker to launch your favourites. It's all about making the experience easier for you, which gets a thumbs up from us.

So the look and feel of the HTC Desire 626 is great, we're great fans of the software, but what about the overall experience? This is when things start to go a little downhill. HTC has opted to add a rather disappointing Qualcomm quad-core, 1.2GHz Snapdragon 410 chip to the device, rather than opting for a faster processor.

Although it doesn't make the Desire 626 unusable, it's noticeably slower than the Moto G and Sony Xperia M4 Aqua, which are both on the lower end of the price spectrum alongside HTC's contribution.

Another area where the HTC Desire 626 disappoints is the camera. Although on paper, the 13-megapixel camera sounds great, image reproduction was overly dark and details were blurred out, making them look as if they were taken on a much lower-specced handset.

Changing the camera to HDR mode did improve the exposure a little, while adding the flash lightened things up enough to see more detail (sometimes leading to overexposure of the background too), but it's a sad state of affairs when you have to resort to what feels like artificially doctoring snaps to make them look passable.

Battery life can also be compared to devices in the same price bracket as the HTC Desire 626 and in this case, HTC's mid-ranger is placed in between the Moto G and Xperia M4 Aqua, achieving over 10 hours in the continuous video playback test.

The 2000mAh capacity is pretty good for a lower-end handset and although it means you won't be reaching for a charger at every opportunity, we can't help thinking the step down in processor should have meant a longer juice-life.

The HTC Desire 626 isn’t the worst mid-range device we’ve reviewed, but it equally isn’t the best either. In fact, the majority of sub-£250 devices eclipse it, including the Moto G, which is probably the best all-rounder at this price level.

The camera may not be important to business users, but top-level performance and battery life are likely to be two factors you’re looking for when you’re choosing a new smartphone either for yourself or to roll out to multiple employees and in this case, the HTC Desire should sit lower down the list than, say, the Moto G and Sony Xperia M4 Aqua.