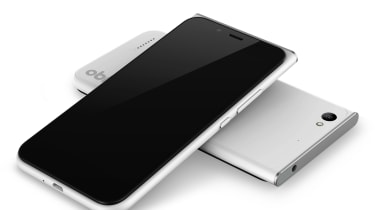 There are a staggering number of companies making cheap Android phones, but very few of those firms will be household names. Most people will draw a blank at the mention of Obi Worldphone, but this latest entrant in a very crowded market has the marketing advantage of a well-known founder John Sculley, who was CEO of Apple from 1983 to 1993. The Obi MV1 is no iPhone, but it does have a quirky sense of style that makes it almost as desirable as its more famous distant relation. Almost, but not quite.

The Obi MV1 is nothing if not distinctive looking. It's curved on all edges, with the exception of its flat top, while the screen is raised up by a few millimetres in a way reminiscent of the very first Windows Phone 7 Lumia handsets from Nokia. Although a tad derivative, we nonetheless like the MV1's casing if only because the ridge where the edge of the raised screen meets the rest of the phone it provides much appreciated purchase for our fingers. The MV1 is available in either black or white. 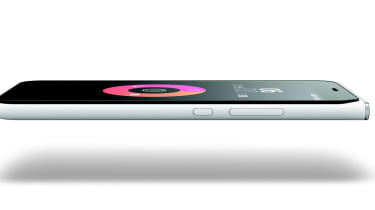 The back panel is easily removable so you can quickly replace the battery, add more storage using micro SD cards and insert up to two micro SIM cards. The latter is especially useful if you want to use a second foreign SIM while travelling for lower calling and data costs or just want a single phone for both business and personal use.

As expected for an Android-based phone, you get a good level of flexibility over how to use those dual SIMs. You can specify which SIM is used by default for making calls, sending texts and accessing the internet. If you're roaming abroad with your UK SIMs, then the network strength indicators in the status bar will have a small R a very visual reminder that you could be racking up higher data costs than usual. 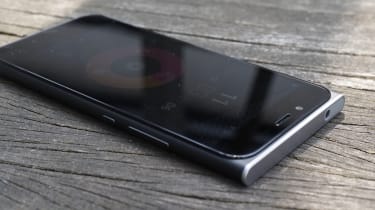 At first glance the MV1 looks out dated on the software front as it only comes with Android 5 Lollipop pre-installed rather than Android 6 Marshmallow. On the other hand, it does have the popular Cyanogen interface overlay (version 12.1.1) sitting on top of Android.

Apart from the absence of Google Now to the left of the first home screen, it appears little different to stock Android at first glance. Indeed, much of Cyanogen's appeal lies in numerous small changes which, taken as a whole, are quite charming.

A circular widget on the lock screen lets you quickly unlock straight to the phone or camera app, but without adding visual clutter to the lock screen as with equivalent versions of this feature on so many other Android overlays. 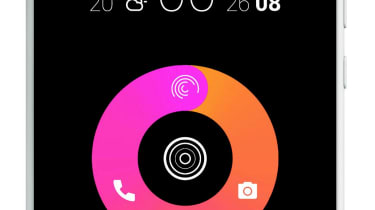 Other nips and tucks include the ability to block calls from hidden numbers and the option to screen calls against the Truecaller database of spam callers.  You can quickly skim and scan through the contents of your app drawer by sliding your finger across the alphabetical index at the bottom of the screen. We also like the battery life indicator in the status bar which is circular instead of vertical,  which makes it a surprisingly more accurate as an at-a-glance indicator.

It's a shame these improvements couldn't have been delivered on top of Marshmallow, especially with no firm Marshmallow upgrade date in sight, but we still like Cyanogen as a whole. It's hardly essential, but it's more subtly customisable and less intrusive than the likes of Samsung TouchWiz.

The seams start showing once we get to the screen and camera though. The 5in screen's 720p resolution might appear low to the spec-obsessed, but it's still high enough for crisp text. Its brightness is merely average, so we often struggled to get a clear view outside in even modestly sunny conditions. Its colour accuracy can't hold a candle to even modestly more expensive phones, but it's just about good enough.

The eight megapixel main camera is just plain poor. Shots outdoors in bright sunlight looked a bit too soft and washed out with a surprising amount of noise and image artefacts, so it was no surprise that low light photography was out of the question. It's also painfully slow, from the laggy autofocus to its frustratingly glacial pace at actually taking photos once you've pressed the onscreen shutter button. 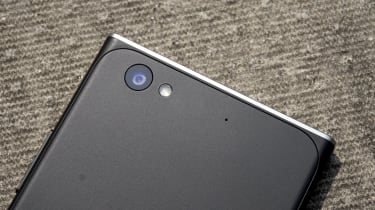 Given that the MV1 comes equipped with an elderly Snapdragon 212, a 1.3GHz quad core processor, we weren't expecting it to excel in our benchmarks and it performed in line with our expectations an unremarkable, very pedestrian set of scores.

What was surprising was just how bad it was at multitasking. Attempting to switch between Chrome, Google Maps and Hangouts hardly the most demanding set of apps brought the phone to its knees with the touchscreen struggling, and often failing, to catch up with our finger movements. This shouldn't be the case given that the MV1 has 2GB of memory and Windows Phone 8 and 10 Mobile phones with similar specs have coped better with a similar workload. Even when just sticking to a single app, the touchscreen often lagged behind our prods and swipes.

At least battery life was respectable, albeit not remarkable or exemplary. It lasted a reasonably lengthy nine and a half hours in our WiFi web browsing test, but fell behind when it came to video playback managing just under nine hours. When connected to the BT Mobile network in London's West End and used for GPS, calls, photography and internet, it just managed 27 hours. 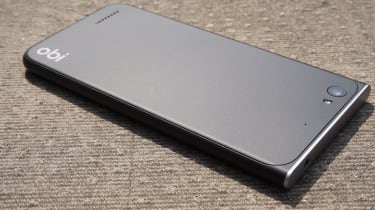 Our positive first impressions of the MV1 soured quickly as we grappled to use it for anything other than very basic tasks. If we could crack open the stylish casing and replace the Snapdragon 212 and poorly optimised touchscreen controller with better components, then it'd immediately be a far better phone. As it is, unless you're on the tightest of budgets, there's no reason to buy the MV1 when the far superior Moto G4 is available for only a bit more cash. And if money really is everything, the less frustrating Moto E costs even less.