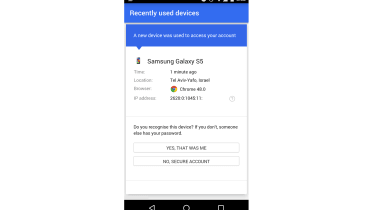 Google will warn Android users via a notification if someone logs into their account from a new device.

Google already sends warning emails to users if it spots dodgy activity on their account, but is taking that a step further with a notification on their handset.

If you - or someone else - logs into your Gmail from a new laptop, you'll get a notification on your Android screen.

"When users add a new device to their account, native Android notifications will tell the user about the newly added device or security event," Google explained in its App Update blog.

If you are suspicious of the sign-in, you can choose to review the activity and see what device was added, from where, and other key details. If the login was you trying out a new laptop or tablet, you can simply dismiss the notification.

The aim is to increase the speed with which users are alerted of potential problems.

"Now users are quickly notified on multiple devices when a new device has been added," Google said. "This increases transparency to the user of what actions they've performed and allows them to flag any suspicious activity they may be seeing on the device."

Google said users are four times as likely to look over such security information when it is shown as a notification than when it is delivered via an email.

The feature will roll out to all Google and Android users, but may take a few weeks to arrive to everyone.