Has Samsung made the best phone of the year? 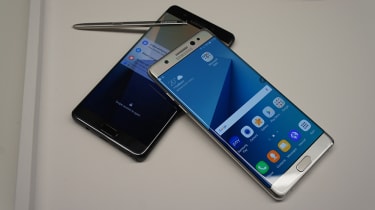 If the Galaxy Note 7 is Samsung's way of making up for not releasing the Note 5 in Europe, then it has done a fantastic job. The Note 7 follows the company's excellent Galaxy S7 and S7 Edge, and has skipped the Note 6 entirely in an effort to bring the two ranges in line. But can it continue Samsung's recent winning streak?

Let's address the most obvious question first: no, Samsung is not going to make the same mistake twice. The public outcry from fans has ensured that the Note 7 will indeed be seeing a European release. The Note 7 becomes available for pre-order on 16 August, and goes on general release on 2 September.

One of the Note range's main selling points has historically been a larger than average screen size, but even though most smartphones are pushing the bounds of pocketability, the 5.7in Note 7 is still one of the biggest devices around. 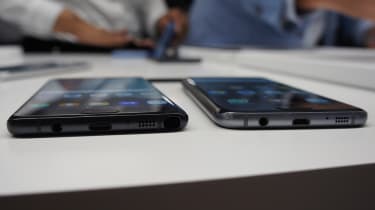 What is surprising is that even though the Note 7's curved display is 0.2in bigger than the Galaxy S7's screen, the two devices feel virtually identical in the hand. This is thanks to subtle refinements in Samsung's design process that have left the Note 7 perfectly symmetrical.

As we have come to expect from Samsung, the screen is an excellent quality Super AMOLED display with Gorilla Glass 5 and a QHD resolution. We are relieved to see that Samsung has resisted the urge to bump it up to an unnecessary 4K resolution, too. The Note 7 also uses HDR technology for increased contrast and colour depth, supposedly powered by an adapted mDNIe chip from its range of TVs.

In accordance with Samsung's mission of bringing the Note range in line with its flagship Galaxy S devices, the Note 7 also has full IP68-rated water and dust-proofing. This covers it against immersion in up to 1.5m of water for up to five minutes. It is an excellent feature, and one that is coming to define Samsung's devices.

Elsewhere the device is as well-made as we have come to expect. Available in black, silver and pale blue, it feels excellent in the hand large enough to be productive with, but not so big that operating it one-handed becomes impossible. 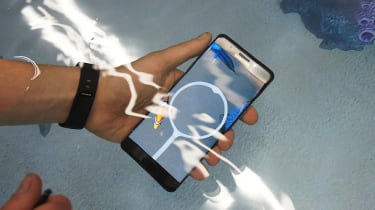 The weight has been slimmed down to 169g, and it measures just 7.9mm thick. Although this phone is technically a phablet, it doesn't have that clunky, unwieldy feel normally associated with larger handsets.

The Galaxy Note's signature S Pen stylus makes a return with the Note 7, although Samsung says it has been radically redesigned. We didn't think the S Pen could get any better after the Note 5's stylus introduced a useless but therapeutic clicker to the end, but the new Note 7 S Pen has somehow done it.

The pen's nib is now 0.7mm thick, and thanks to a seven-year research partnership with graphics tablet specialists Wacom, it's now more accurate than ever. Drawing and writing with the S Pen is an absolute joy, and one of the most accurate stylus experiences we've ever had with a smartphone.

All the S Pen's associated software has been streamlined into one app, which is now called Samsung Notes. As well as painting on a virtual canvas, you can jot down notes which can then be pinned to the Note 7's always-on display.

Pen-based shortcuts are back, too. Hovering over the screen with S Pen brings up a menu, which will let you record an instant GIF, take notes and even translate words and photos using Google Translate. As with the previous version, the S Pen slots satisfyingly into a housing on the bottom of the device. 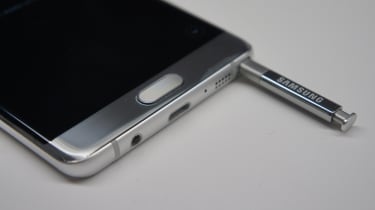 As expected, the Note 7 runs Android Marshmallow out of the box, and will more than likely be one of the first devices to be upgraded to Android Nougat when it eventually arrives. It's also running the company's own-brand TouchWiz overlay on top of the core OS.

TouchWiz used to be a bit of an aggravating mess, but Samsung has continually refined it to the point where we don't mind it at all any more. For this release, the icons have had minor tweaks to make them less obtrusive and easier on the eye.

Also introduced is a new blue light filter' mode, which is similar to Night Shift on iOS and changes your display to a softer hue in order to help you sleep better at night. It has even got motion wallpaper that moves with the device's orientation, which is a fun gimmick but far from essential. We would also be worried about what it's doing to the Note 7's performance and battery life.

Rumours surrounding the Note 7 have proved to be mostly accurate; it has 4GB of RAM, and a Samsung-made Exynos 8890 octacore CPU, clocked at 2.3GHz and 1.6GHz. That's only in the UK though other territories will get a Qualcomm Snapdragon-powered version. 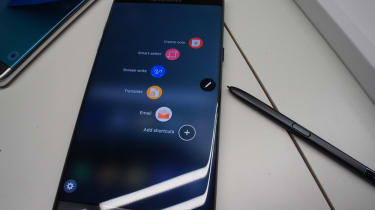 Mobile gamers should be well-served too - in addition to a pretty impressive list of hardware specs, the Note 7 also uses the Vulkan graphics API, which promises lower overheads and CPU usage. In order to take advantage of this, Samsung is bundling a series of games with the Note 7 including four Vulkan-compatible titles - Need for Speed: No Limits, Vainglory, Hit and Olympus Rising.

Samsung has really doubled down on storage for the Note 7. Not only does it have expandable storage via MicroSD card up to a maximum capacity of 256GB, but the base storage capacity has also been upped to a very healthy 64GB. With an allocation like that, even power users will struggle to fill up the whole device.

In the unlikely event that you do, though, the company is also offering 15GB of free storage via Samsung Cloud with every purchase of the Note 7.

The Note 7's battery is the only slight worry. The 3,500 mAh cell is actually slightly smaller than the battery used in the S7 Edge, despite the fact that it's got a larger screen and more features to power. It's possible the Note 7 has some software optimisation tricks going on, but we're expecting somewhere in the region of 18.5 hours, which is about on par with the S7's score in our battery tests. 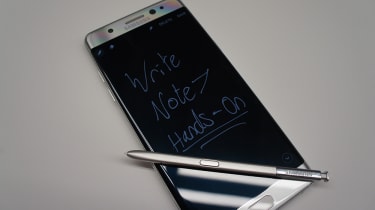 On the flip-side, running out of charge shouldn't be too much of a worry, as fast wireless charging makes a return from the S7 range. The Note 7 is also the first Samsung device to come with USB Type C charging and, in an admirably classy move, the company will include a MicroUSB to USB Type C adapter in the box with every Note 7.

The Note 7 uses the same camera as the S7, so it has one of the best snappers in the business right out of the gate. You would expect the image quality to be on a par with the S7, but based on our brief time with the Note 7's camera, it somehow looked slightly better (although this was possibly down to good lighting).

Samsung has been nurturing a strong security pedigree for the past few years. Its KNOX software is widely regarded as one of the best mobile security solutions in the business, and the Note 7 has KNOX built in at the microchip level. Samsung has also taken yet another step in bringing biometrics to the mass market.

The company was one of the first to include a fingerprint reader with its devices, and it has now stepped this up by fitting the Note 7 with a full-on iris scanner. The system takes around 30 seconds to register your iris print, and after that logs in virtually instantly. 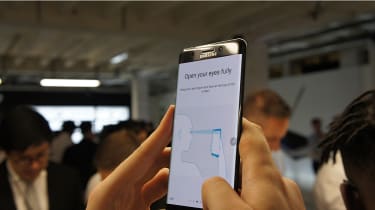 Using Samsung's web browser, it even claims to let you log into websites and services using your biometric data something Windows Hello hasn't yet been able to achieve, despite launching a year ago.

Also introduced with the Note 7 is a secure folder a separate, siloed area for storing photos, files, messages and contacts that you want to keep away from prying eyes. The folder is protected by biometric authentication, meaning that even if you give your phone to a friend, they can't go rifling through your most private data.

With the Galaxy Note 7, Samsung has almost certainly made one of the best smartphones of this year. Simply adding stylus support to the already-excellent framework of the S7 Edge would have probably been enough, but the company has also thrown in top-notch biometric security, software upgrades and a more than generous storage allocation. We'll know more once we can conduct a full review, but we suspect that this phone is going to be seriously tough to beat.