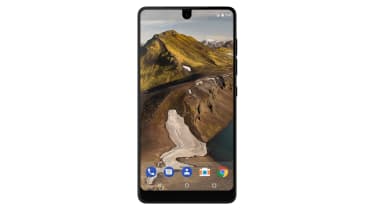 Essential, the new smartphone company headed by Android co-founder Andy Rubin, accidentally leaked data belonging to 70 of its customers to other users.

Earlier this week, customers were asked to provide photo ID alongside their orders for Essential's new smartphone. However when the files were uploaded, they were inexplicably sent to other customers who had previously placed orders.

Rubin took to Essential's blog to offer a humble apology for the mess: "We sincerely apologise for our error and will be offering the impacted customers one year of LifeLock. Being a founder in an intensely competitive business means you occasionally have to eat crow. It's humiliating, it doesn't taste good, and often, it's a humbling experience."

He added that further steps have been taken to disable misconfigured accounts, and that "safeguards" have been put in place to prevent a similar event in the future.

"We will also continue to invest more in our infrastructure and customer care, which will only be more important as we grow," he said.

It's a somewhat embarrassing episode for a company that's that looking to not only penetrate an incredibly difficult market, but also reshape the way consumers buy and upgrade their devices.

The Essential phone, which is due for release in the UK before the end of the year, promises to offer a modular experience for users, allowing them to switch out hardware instead of becoming locked into upgrade cycles.

"I remain heartened and motivated by the groundswell of support that Essential has experienced since unveiling the company on May 30th," added Rubin. "I humbly thank our customers and channel partners for your patience and understanding as we proceed with the launch of our first products."

Smartphone startup Essential has raised $300 million in new funding ahead of announcing the official release for its device.

The company said Access Technology Ventures led the round according to Reuters.Other investors included Tencent Holdings, Foxconn and Amazon, who used its Alexa Fund. Redpoint Ventures and Playground Global, which had invested in the company previously, decided to do so again in this round.

Essential was founded by Android co-founder Andy Rubin who told the world about his new phone last May. Essential president Niccolo De Masi told Reuters that an official release date for its phone will be announced next week.

Customers will be able to buy the $699 phone from Best Buy and Sprint stores in the US. Amazon, Best Buy and Essential will also sell unlocked versions of the phone.

De Masi added that Essential would focus on building its brand in the Western World before expanding to other regions. He also said sales of "low single-digit millions" of phones would count as a success in its first year.

"Over the next five to 10 years, we will have the same retail footprint and product diversity as Samsung and Apple," he stated.

In July there were reports that Essential could release the phone in the UK later this year. It held talks with mobile networks, including EE, but there is still no official release date or price for UK customers.

The phone is called Essential as it comes with the basic items you need. This means no preloaded apps and the phone itself has no logo or brand name. It has a 5.7in QHD screen with a fingerprint sensor, a Snapdragon 835 processor, 4GB RAM and 128GB storage.

It's also a modular phone; users will be able to buy a separate 360 camera at launch which, using magnets, attaches itself to the phone. The phone will have a lot of competition to take on including the upcoming iPhone 8 and other popular Android phone such as the Samsung Galaxy S8.

The new smartphone created by Android co-founder Andy Rubin will be released in the UK later this year.

The company held talks with mobile networks, including EE, but there is no official price or release date for UK customers who are interested in buying the minimalist phone.

As reported by the Financial Times, the startup is planning launches in the UK, Western Europe and Japan, although it still hasn't launched in the US.

COO of Essential, Niccolo de Massi, told the publication that the device has been designed for "trend setters and technology seekers".

In the US the phone is priced at $699 and is an exclusive for network operator Sprint. It was originally meant to launch in June in the US but this has not happened, although de Masi said the launch is imminent.

The phone is called Essential, as it comes with only the essential items you need. This includes a lack of preloaded apps and the phone itself has no logo or brand name. In terms of specs, it has a 5.7in QHD screen with a fingerprint sensor, as well as a Snapdragon 835 processor, 4GB RAM and 128GB storage. It is also modular; users will be able to buy a separate 360 camera at launch which, using magnets, attaches itself to the phone.

Rubin left Google in 2014 and told the world about his new phone last May. He has to penetrate a hard market, and the modular phone will have a lot of competition to contend with - including the upcoming iPhone 8 and top-end Android phones such as the Samsung Galaxy S8.

Android co-founder Andy Rubin is set to release a new device running the operating system he helped create - the first smartphone from his new company, Essential.

The device, also called Essential, runs Android and has a 5.7in QHD screen with a fingerprint sensor as well as a Snapdragon 835 processor, 4GB RAM and 128GB storage. It has a 13MP rear camera and a 8MP front camera, weighs 185g and uses a 3040 mAh battery, too. 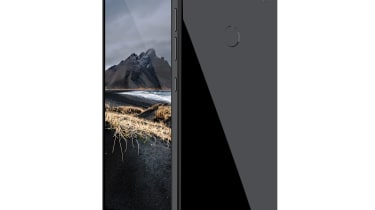 Essential is trying to include only the 'essential' parts of the phone you need, and has a magnetic connector which "keeps your phone cord-free, future-proof, and always up-to-date". The company does not want users to replace their battery or accessories every time they upgrade the phone, so hopes to make things a bit simpler by ensuring the first accessories you receive can supposedly be used time and time again if you decide to upgrade in the future.

The first of these the company is promoting is the 360 camera, which snaps on to the back of the phone via magnets. The camera is 12MP and takes a different approach to what other smartphone makers are doing, by being a modular component instead of something built into the device. 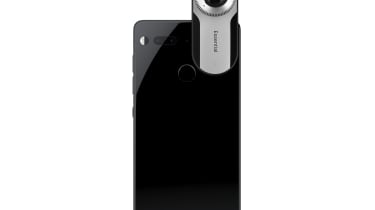 The phone is charged on a dock that connects to the phone magnetically. The device is made out of titanium as, according to the company, titanium doesn't scratch or bend. It also doesn't have a headphone socket - meaning that it may ship with a headphone dongle or adaptor.

The phone is set to come in four colours: Black Moon, Stellar Grey, Pure White and Ocean Depths. It prices at $699 or $749 if you buy it with a 360 camera. It is currently available for preorder in the US, with no UK release date yet set. 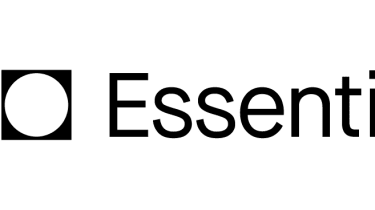 Rubin left Google in 2014 and went on to set up his own investment company called Playground. Essential is a company which Playground invests in, of which Rubin is also the CEO.

His new phone's approach is reminiscent of Google's Project Ara, which aimed to build the world's first modular smartphone to allow users to swap hardware in and out as they upgraded or wanted to change what their phone could do.

It ultimately failed, withGoogle shuttering the project last September, though Google may revive it via licensing deals.

Rubin has to penetrate a hard market since the new modular phone has a lot of competition to contend with, ranging from the upcoming iPhone 8 and many top-end Android phones like theSamsung Galaxy S8andGoogle's own Pixel.