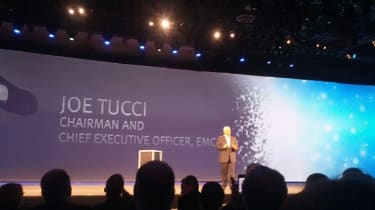 EMC has revealed further details about the aims and objectives of its new Platform-as-a-Service (PaaS) company, Pivotal, and the role it will play in solving big data problems in the enterprise.

Pivotal is partly owned by EMC, VMware and General Electric (GE), and began trading as a standalone entity last month.

Speaking at the EMC World conference in Las Vegas, EMC CEO Joe Tucci told attendees that Pivotal will be the platform needed to create cloud agnostic applications that will help users make sense of their unstructured data.

The amount of data businesses will have to wade through is set to skyrocket, he warned, as the number of devices that connect to the internet increases over time.

"Sensors are being built into everything you can imagine...and everyone has a cellphone in their pocket. But instead of coming at typing speeds, [this data will be] coming in at machine speeds, which means you not only have to ingest huge amounts of data, but huge amounts of data very quickly," he said.

"When you think of that [on a] petabyte scale, you're going to need to build these applications in a new way...[using] modern programming tools, data fabrics and the cloud," added Tucci.

This taps into another trend EMC has flagged a number of times at this year's event, which is the rise of the third application platform, which IT Pro reported on yesterday.

The first application platform revolved around the use of mainframes, while the second platform is the term used to describe PC and client server-type applications.

"As we moved from platform one to platform two there [were] 21 companies with over a billion dollar market cap and the only one that made it successfully to platform two was IBM," said Tucci.

"We're now having the same transition from platform two to platform three...and the companies that are prominent on platform two [will] become much less so and [we'll see] new companies come to great prominence."

Many businesses currently run mission critical applications on the second platform, said Tucci, and an important part of Pivotal's work will centre on helping companies correct this.

"To address this we created Pivotal...[and] when we build these next generation apps, they will run very slickly on the VMware cloud, but these same applications will have app portability and run on Amazon Web Services, Azure and Openstack," added Tucci.  "Isn't that a great way to build an application?"

Former VMware chief Paul Maritz is overseeing Pivotal's operations, and during his part of the keynote said these applications will make it easier for companies to make sense of the "big and fast" data they receive from multiple sources.

"Not only is the number of things attached to the internet going to increase by two orders of magnitude, but these devices will create information that needs to be made sense of," said Maritz.

"We need to provide businesses [with applications to] analyse data at rest and fast data," he concluded.