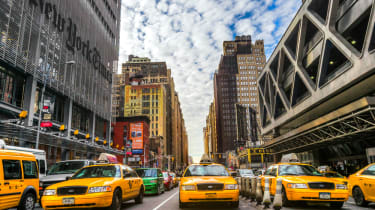 Uber now has more cars on New York roads than the city's traditional yellow cabs, according to new figures.

The four-year-old taxi service, which lets you hail a taxi via an app, now has 14,088 cars in New York, compared to 13,587 yellow cabs operating in the city.

Those numbers come from NYC's Taxi and Limousine Commission, which completed the research to demonstrate the changing picture of taxi services in the city.

Uber's superior numbers could be partly due to the fact that Uber signs up drivers who simply use their own cars, while New York taxis are affiliated to particular companies.

Although Uber has more cars, this doesn't mean that it is more popular with the residents, however.

The commission's stats show that the yellow cabs have 15 times more passengers as the Uber cars - equivalent to around 440,000 more cabs.

But this didn't stop taxi driver unions from hitting out at the burgeoning start-up, accusing it of stealing customers away from traditional cabs.

"Uber having an unlimited number of cars means no drivers - taxi or black car and livery -- will earn a decent living. Incomes for drivers are dropping as much as $5,000 per year," said New York Taxi Workers Alliance executive director, Bhairavi Desai, said in a statement.

Uber has courted controversy in the past year, with more bad headlines written about the firm as its userbase shot upwards.

While it operates in 50 countries and 250 cities, the company received heavy criticism for its fare-calculating algorithm after it pushed up fares in central Sydney during a hostage crisis in December.

Meanwhile, a woman who claims she was raped in India by an Uber driver is suing the company.

Uber has pledged to create 50,000 new jobs across Europe by the end of the year if cities approve its service.