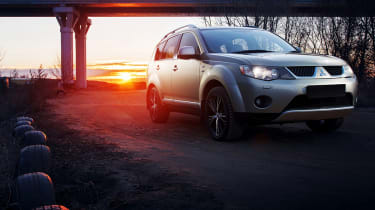 Mitsubishi's Outlander hybrid car can be wirelessly hacked, allowing its alarm to be disabled and its battery drained, security researchers have discovered.

The breach is present in the car's on-board Wi-Fi system, and could make it easier for thieves to steal the vehicle without its owner being alerted.

The Outlander's exploit was found by security expert Ken Munro and his colleagues at Pen Test Partners. Munro and his team's findings were "greeted with disinterest" by Mitsubishi until they involved the BBC, who helped get the car manufacturer's attention.

"Mitsubishi have since been very responsive to us! They are taking the issue very seriously at the highest levels," wrote Munro.

Mitsubishi has recommended that Outlander owners turn off the car's Wi-Fi system while it investigates the issue.

Munro's own investigation started when he was waiting to collect his children from school, and noticed an unusual Wi-Fi signal on his smartphone that turned out to be coming from a nearby Mitsubishi Outlander.

The car belonged to a friend who showed him the accompanying app could be used to control aspects of the vehicle. Munro then decided to buy an Outlander of his own to experiment with how the car and app connect.

Network-connected cars from other manufacturers use web-based services to communicate with their smartphone apps. Typically, these commands pass through a server before being sent on to the car over a mobile network.

However, with the Outlander, Mitsubishi's app talks directly to the car's on-board Wi-Fi, and Munro asserted that it has severe security issues.

Firstly, Munro said that Wi-Fi SIDD is very distinct, which can be easily identified once known. This has led to the location of many Outlanders being recorded on websites that list the names of access points.

"Some were spotted whilst driving and others parked at the owner's house," he wrote. "A thief or hacker can therefore easily locate a car that is of interest to them."

In their experiments at Pen Test Partners, Munro and his colleagues tinkered with the car as a hacker might. Using their infiltration techniques, they used a method of replaying commands to the vehicle, and were "shocked" to find they could control it at will.

Using their hack, Munro and his team were able to turn the car's lights on and off and mess around with its electric charging programme including draining the battery, turning on the air conditioning, and, disabling the car alarm.

"This is shocking and should not be possible. Once unlocked, there is potential for many more attacks," Munro wrote.

A demonstration of the issue with the Outlander's on-board Wi-Fi was shown to Mitsubishi UK on Friday, 3 June, and the bugs were still present in the latest version of the app.

Speaking to the BBC, Munro said he had been impressed by the cooperation he had received from Mitsubishi.

In response to the finding, a Mitsubishi spokesperson said: "This hacking is a first for us as no other has been reported anywhere else in the world."