With 30 million downloads, the app has gained massive popularity in Asia 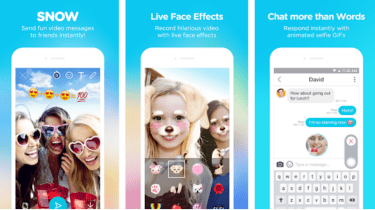 A South Korean Snapchat clone called Snow is taking off across Asia.

The app, which allows users to send disappearing messages, compose video stories and use selfie filters, has been downloaded 30 million times since its launch last September, reports The New York Times. The majority of these downloads have been in Asia, due to the fact that the app caters specifically to an Asian market. While it includes similar filters to Snapchat's, such as its popular dog ears, it also lets users add bottles of soju and Korean popstars to photos and features Japanese-inspired filters such as sumo wrestlers and sushi. The app is becoming hugely popular in China as well, possibly due to the fact that Snapchat is banned there.

Snow's popularity in Asia highlights an important reality for American tech companies: success abroad is not guaranteed. Well-established Asian internet firms, such as the South Korean web portal Naver, which owns Snow, have caused a lot of problems for American companies trying to enter the Asian market. In fact, Naver is the most popular search engine in South Korea, making it one of the few countries in world where Google does not dominate.

For Snapchat, Snow's success could mean that the company has missed out on any original advantage it might have had in the Asian market.

"A lot of start-ups are thinking that if they build a product, they'll be able to go global, but that's just not the case anymore," said Tim Chae, a partner at 500 Startups, in a statement to the NYT.

With the news that the Snapchat adoption rate among users 35 years-and-older has increased by 12 per cent since 2013, according to a report by ComScore, young people who want to avoid unwanted interactions with their parents on the app may want to give Snow, which is availalable in several languages including English, a try. If nothing else, it features far more filters than Snapchat, according to Digital Trends, and allows users to snap their very own GIFs using their phones camera.