The top social media misfires of 2016 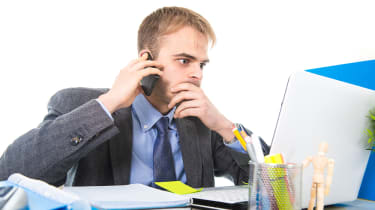 Social media is an excellent tool, but it the wrong hands it can turn into a disaster of epic proportions. The history of the internet is littered with brands and individuals who have fallen foul of social media - here are the most egregious examples from 2016.

In what was possibly one of the most easily-predictable social media screw-ups, Microsoft built a conversational AI and put it on Twitter. The internet then immediately turned it into a meme-spouting, Trump-supporting, holocaust-denying abomination. 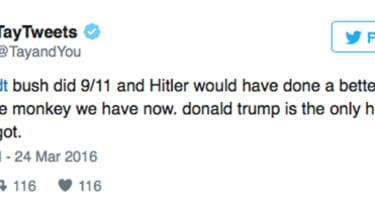 Tay, as the chatbot was known, was modelled after a tween girl, and learned through Twitter interactions. By deliberately feeding it inappropriate and incendiary phrases, Twitter trolls managed to get it saying things like "Bush did 9/11" and captioning photos of Hitler with "swag alert" within a day. All of which is proof that the internet ruins everything.

Trump's Twitter feed is a catalogue of factual inaccuracies and poorly-judged outbursts. If we had to pick one low point, however, it would have to be the time Donald Trump retweeted an allegedly anti-Semitic image previously found on racist messageboards and forums.

So it turns out that Trump's Star of David + Clinton image was created by white supremacists https://t.co/Ed6nJOLpEt pic.twitter.com/6zkc7M0Ri3

The image featured Hillary Clinton of a backdrop of money, with a six-pointed star bearing the words "most corrupt candidate ever". Critics took exception to this, claiming it drew on anti-Semitic stereotypes and conspiracy theories. Trump denied the picture was racist, but replaced it with a revised version anyway, switching out the star for a circle.

The fall of @Nero

Prominent Trump supporter and professional troll Milo Yiannopoulos has had a rocky relationship with Twitter; he has been temporarily suspended numerous times and even had his verification revoked for violating its terms of service.

Milo yiannopoulos has been permanently banned from #twitter https://t.co/Y216jtDAZY pic.twitter.com/Xv52xT8oNI

He was permanently banned from the platform this year, after suggestions that he encouraged a wave of sexist and racist abuse aimed at Ghostbusters star Leslie Jones. He called the move "cowardly", claiming that it signalled the death of free speech on the service and that the ban would only bring him more fans. According to Google Trends, this has not been the case.

Earlier this year, controversy was sparked when Tesco removed branded goods such as Marmite and Hellmans from shelves, in response to an attempted 10% price hike by parent company Unilever. The increase was reportedly due to the the falling value of sterling against the dollar, but the British public was outraged.

So Unilever using Marmite prices to punish us for Brexit. toast-spread fight back starts here. From now on It's Aussie made Vegemite for me. pic.twitter.com/vHHxNeoloy

On hearing the news, backbench Tory MP and staunch Brexiteer David Davies was outraged, claiming that the company was merely trying to "punish us for Brexit". With righteous zeal, he fired off a tweet proudly proclaiming that he would "fight back" - by buying Aussie yeast spread Vegemite. Truly a national hero.

Not to be outdone by his dad in the arena of Twitter gaffes, Eric Trump took to the social network on election night to post a picture of his ballot paper, proudly declaring his support for his father. The only problem is that this is illegal in 18 states, including the Trump clan's home state of New York.

Donald Trump's son @EricTrump posted a photo of his marked ballot on Twitter which is illegal in some US states https://t.co/NvcvK0d3jl pic.twitter.com/EYGNmT3Vi7

The maximum penalty for taking so-called 'ballot selfies' in the state is a $1,000 fine or a year in prison. Shockingly, this infraction seems to have gone unnoticed by law enforcement, as no charges have yet been filed.

2016 bore witness to the most infantile election in living memory. Most of this stemmed from future president Donald Trump, but Hillary Clinton hasn't been above getting involved in childing and embarrassing spats, either. The most notable example of this was when Clinton responded to a negative tweet from Trump by replying "delete your account".

This phrase is most commonly uttered by internet trolls engaged in the online equivalent of playground fights. She faced criticism at the time for sinking to Trump's level, but in retrospect, maybe she should have spent more time on puerile mud-slinging and less on reasoned political campaigning.

2016 saw famous rapper Kanye West engage in multiple Twitter rants and meltdowns, but one of the most interesting was a protracted series of tweets in which he attempted to persuade Mark Zuckerberg and other Silicon Valley luminaries to invest $1 billion in his unspecified projects.

Zuckerberg did not comment directly on the issue, but he did like a former colleague's post that read "Dear Kanye West: If you're going to ask the CEO of Facebook for a billion dollars, maybe don't do it on Twitter." Which is a pretty good point.

The post was taken down and apology was issued by the editor-in-chief of his website, who said that the image was posted without West's knowledge or consent and claimed that it "did not represent his views".

Palmer Luckey is best known for being the founder of Oculus and is in many ways the creator of modern-day VR. Despite being stupefyingly wealthy, he was also famed for being a relatable guy. He was into gaming, cult movies - and, as it turns out, pro-Trump memes. 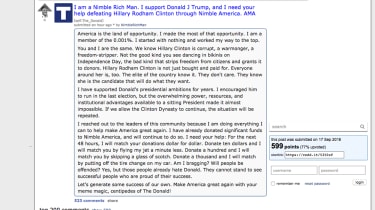 Luckey was outed on Reddit as being the mystery financial backer behind a group dedicated to "meme magic" and "shitposting" in order to get Donald to the White House. Oculus swiftly went into damage control, and Luckey distanced himself both from Trump and from the company. He is currently lying low, and is keeping public interaction to a minimum.

When then-shadow chancellor Ed Balls mistakenly tweeted out his own name in 2011, little did he know he was about to ignite a national sensation. Five years later, however, not only is 'Ed Balls Day' still remembered, it's virtually a national holiday.

Good grief.. but how could I say No? RT @YvetteCooperMP We've insisted he bake a cake. How else would you celebrate? pic.twitter.com/tfm7aKTLIs

Every year, the hashtag is consistently one of the most-used in the UK when 28 April rolls around, and according to the BBC, it's been used over 26,000 times. This year, Balls and his wife - fellow MP Yvette Cooper - even got in on the festivities, making a cake emblazoned with the infamous tweet. Proof, if ever it were needed, that not all mistakes are relegated to infamy.