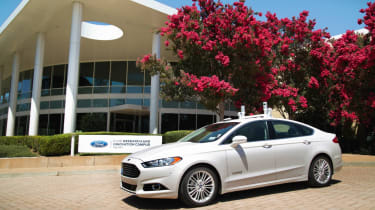 Carmakers Ford and Toyota have partnered to provide free tools to developers wanting to create smartphone apps for automobiles, taking on the likes of Google and Apple.

The SmartDeviceLink (SDL) Consortium, a non-profit organisation jointly run by the car manufacturers, aims to give greater choice to consumers wishing to integrate their smartphones and use apps while driving.

The SDL has hosted its code on open source website GitHub, allowing developers to create SDL compatible smartphone apps on Android and iOS, which in turn will be able to run in any vehicle manufactured by companies signing up to the venture.

Alongside Ford and Toyota, Mazda, Peugeot Citroen, Suzuki and Subaru have all agreed to join the consortium so far, as automakers attempt to create an open standard for app integration.

"Encouraging innovation is at the centre of Ford's decision to create SmartDeviceLink, and this consortium is a major step toward that goal," said Doug VanDagens, global director of Ford Connected Vehicle and Services. "Consumers will win with new, innovative app experiences from increased collaboration and developer engagement."

Developers will be able to make use of current technology already built into SDL vehicles for controlling apps, including display screens, steering wheel controls and voice recognition.

The SDL framework builds on Ford's already existing AppLink software released to the open source community in 2013, which serves more than five million vehicles globally for apps including Spotify and AccuWeather.

"Connectivity between smartphones and the vehicle interface is one of the most important connected services," said Shigeki Tomoyama, president of Toyota's Connected Company. "Using SmartDeviceLink we can provide this service to our customers in a safe and secure manner."

However, while developers will be able to create apps built on SDL code, manufacturers will have the final say on what the user experience will look like, and how it will be integrated into a vehicle, according to VanDagens, speaking to TechCrunch.

Software company Livio, acquired by Ford in 2013, has also been drafted in to manage the project, providing guidance to the SDL consortium and its members.

The consortium represents a move by automakers to become less reliant on Silicon Valley for creating in-car app integration.

While Ford currently uses apps such as Android Auto and Apple's CarPlay in its vehicles, supporting open source creation will allow manufacturers to "deliver user experiences that meet their individual standards while retaining control over how much access apps have to vehicle data".

BlackBerry today similarly unveiled its own push towards in-car app development with the launch of its QNX Software Development Platform 7.0, a 64-bit operating system for use in both connected and automated vehicles.

While the SDL platform is considered "stable", the consortium have stated that it is looking to the developer community to create new features and help identify bugs or areas for improvement.