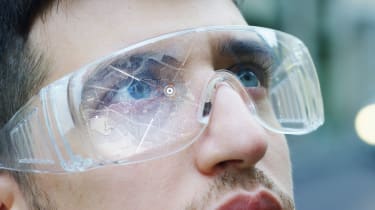 Intel is reportedly moving to sell a majority stake in its augmented reality business, in the hopes of attracting new investors ahead of the launch of a range of smart glasses later in the year.

The chip giant is said to be looking for multiple backers to provide additional investment into the unit that's thought to be worth $350 million, according to anonymous company sources speaking to Bloomberg.

Intel's upcoming AR glasses are being developed to pair with mobile phones via Bluetooth, able to display contextual information on top of the user's field of vision by reflecting images off the glass and onto the retina, according to the sources.

They added that Taiwanese manufacturer Quanta Computer is said to be making the device, currently known internally as 'Superlite' but may be rebranded as 'Vaunt'.

The search for additional investors suggests Intel remains sheepish about the AR market. The company's ambitions took a hit when it was forced closed augmented reality firm Recon Instruments, which Intel acquired for a reported $175 million in 2015, after products failed to keep pace with rival devices.

The call for investors isn't entirely financially motivated, as, according to the sources, Intel is also seeking backers with strong sales connections and those with expertise within the AR industry.

Intel's new attempt at the AR space will bring it into direct competition with the likes of Apple and Amazon, both of which are said to be developing their own pair of smart glasses.

The AR push is seen as a way for Intel to diversify its revenue streams and move away from its reliance on markets it has been traditionally dominant. The company posted revenues of $62.8 billion for 2017, $34 billion of which came from its processor chip unit, and $19 billion from its data centre business.

Despite posting 6% revenue growth, it's unclear whether the company can maintain its momentum given the recent fallout from the Meltdown and Spectre security vulnerabilities, and news that Samsung has overtaken Intel as the largest chip manufacturer.