First, do no harm: Why AR doesn't belong in the operating theatre

Despite the spiel from tech companies, augmented reality can create more problems in professional situations than it solves 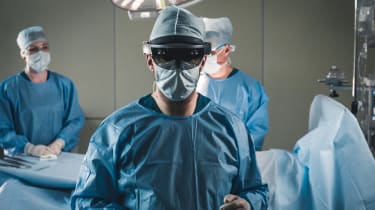 Unlike some of my IT Pro colleagues, I love a good gimmick. I want the next piece of tech that touches the headlines to defy logic in such a way that my cynical journalistic nature goes straight out the window. I want it to 'wow' me and make me say "ooo" this is the kind of stuff I love.

Written off as a gimmick at the outset, we can take foldable phones as an example. As an actual device designed to be used every day I hate them, but I love the gimmick and ambition of them. I don't care if they're thicker than a Nokia 3110 or as fragile as a porcelain teapot, they're new and they're funky. Therefore, foldables have a place in my funk-loving heart.

Augmented reality (AR) is one of those new-ish pieces of tech that could, by the cynics and the unimaginative, be called a gimmick. However, some of the industry's major players are seeing far more in the technology than just an opportunity to develop popular mobile games. For example, Google has announced the rebirth of Google Glass, which will this time be pitched as an enterprise device, rather than a consumer one.

But there's a very dark (and very real) cloud hanging over AR in the professional sector.

A team from the University of Pisa made some worrying findings regarding Microsoft's HoloLens. The researchers' investigation suggests surgeons who use the headset are less optically accurate and become cognitively fatigued quicker than if they were just relying on their own naked eyes.

20 surgeons were given a task involving connecting dots with pen and paper, which showed that when looking through the HoloLens, surgeons were consistently drawing lines too long or too short, by 2.3mm on average. Those few millimetres may seem so small as to be inconsequential, but in the operating theatre it can be the difference between an artery left intact and another irreparably knicked.

So now the red flag of all red flags has been raised about AR headsets, we have to wonder about the true viability of the technology in business. Is there a risk that a patient could be lost due to a misplaced scalpel, or an automotive engineer suffering a serious shock after misjudging the position of a live wire?

Questions like these simply cannot go unanswered and we shouldn't be forcing innovation in areas where innovation is neither needed nor successful.

Of course, this isn't the first time the tech industry has forced things out of the R&D pipeline prematurely and it most likely won't be the last. While the manufacturers of AR solutions like to sing the praises of the technology, touting the 'terrific' use cases and the bright future of mixed reality, there are some of us that don't want our realities mixed. Some of us like our regular reality just fine. We don't want to be under the knife while our surgeons struggle to determine the precise location of a vein because their two realities, real and augmented, are telling their eyes different things.

The evidence is stacked against AR for its use in business, but I don't think we should go ahead and ban it outright. There are some wonderful applications of AR in other areas such as Google Maps, for example. Showcased on the latest line of Pixel phones, the AR for Maps feature is hugely reliable and effective while simultaneously managing to avoid killing me fabulous. Just like how it was decided AR shouldn't be used to increase the lethality of soldiers, though, it also shouldn't be used to increase the lethality of my healthcare providers.

Technology shouldn't be built when it could harm others and AR has consistently over time proved that it bears the potential to do just that. So let's take it out of the hands of temporarily cataractous surgeons and engineers at the risk of electrocution, don't allow it to increase the "lethality" of soldiers and just let it be what it was always meant to be an enabler of joy in real-world Pokemon hunting.