20% of UK jobs are at risk of automation 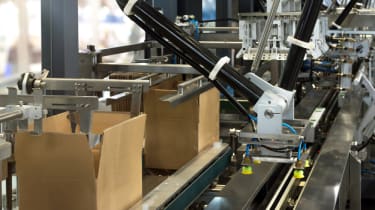 One in five British jobs is expected to be performed by robots by 2030, according to a new report that links technology innovations to a deepening of economic and political divisions between the north and south of England.

That figure rises to one in four outside of the south of England, with the Centre for Cities think tank claiming that workers in Mansfield, Wakefield, and Sunderland - manufacturing and retail hubs - are considered to be most at risk of automation over the next 20 years.

A total of 3.6 million jobs will be lost to automation and globalisation by 2030, according to the Cities Outlook 2018 report, which acts as an annual healthcheck on the UK economy.

It found that the spread of these job losses would be uneven, with wealthier cities in the south, including London, being more insulated against automation, with 18% of jobs being at risk, compared to 23% elsewhere in the country.

Sunderland and Wakefield are identified as being particularly vulnerable, with almost 30% of jobs likely to be lost as a result of automation, as well as Mansfield, which is heavily reliant on retail jobs (16%) and companies such as Sports Direct, which has a major warehouse site in the region.

Around 26% of jobs in Stoke, Doncaster, Blackburn, and Northampton are also considered to be at risk from automation, above the national average of 21%.

The report, which assessed 62 cities across the UK, is likely to reignite debate about investment discrepancies across the north-south divide, particularly as affluent areas such as Oxford and Cambridge have a job risk of just 13%.

Although the majority of UK cities stand to benefit from the creation of new jobs as a result of opportunities brought about by automation, the types of jobs created in the north are likely to be lower-skilled and less well-paid than those in the south, the study found.

Andrew Carter, chief executive of Centre for Cities, said the findings revealed a "real risk" that some regions will suffer over the next few decades.

"In an evermore divided country, it's increasingly clear that a one-size-fits-all approach from central government is inadequate to address the myriad issues that different places face," said Carter.

"The challenges and opportunities ahead for Blackburn are very different to those for Brighton. The government needs to give cities more powers and resources to tackle the issues that automation and globalisation will present, and to make the most of the benefits they will bring."

A report released last year by accountants PwC found that age would be a significant factor when it comes to job losses, with almost a third of young workers, many of whom are employed in the retail sector, being at risk of automation.

However, the Institute of Fiscal Studies has also warned that above-inflation increases to the National Living Wage may have unforeseen effects on the pace of automation. If forecasts are correct, the NLW will rise to 8.56 by 2020, with the proportion of workers over the age of 25 within the minimum wage bracket tripling by that date.

What's more, those falling into the bracket are most likely to be in the 10% of the most routine occupations, such as cashiers and receptionists - those most at risk of being replaced.

Jobs such as sales assistants, retail cashiers, administrative and customer service roles are likely to decline by 2030, while those in media, engineering, hospitality and natural and social science fields are set to grow, according to the Centre for Cities report.

With dire predictions of automation's impact on UK workers, the government has been urged to reskill people who stand to lose their jobs, so they can find new, more highly-skilled, roles.