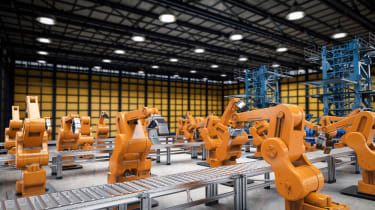 The UK government must come up with a long term strategy for managing the challenges of automation and moving to a low-carbon economy, a trade union report has said.

Union leaders at the Trade Union Congress have said that without strong guidelines and action at a local government level, industrial communities and towns could suffer as automation, AI and the need to decarbonise the economy make sweeping changes to industries.

"When working people and communities are involved in making plans, industrial transformation can mean positive change," she said, adding that communities risk being "swept aside" by new innovations in technology if left isolated.

"The main goal of local industrial strategies must be the creation of good jobs. And the foundation must be co-operation between government, industry and unions, with workers and communities taking part in making plans."

The report highlights research by the New Economics Foundation thinktank, which suggests that the UK may be able to learn from other countries that have gone through difficult transitions, such as unions in German getting businesses to agree on a deal that sees all money saved from new technologies going back into jobs and training.

Alice Martin, head of work and pay at the New Economics Foundation, said that the UK has "an appalling track record on managing industrial change in a fair and just way".

Given the critical juncture, we are at with climate change and accelerating automation, leaving impacts on UK jobs and industries to the whim of global market forces will only deepen existing divides and inequalities," she said.

"It is important now more than ever that politicians take steps to understand the nuts and bolts of industrial change in practice and how it can be shaped by the state, employers and unions representing the workers and communities affected."

The effect of the rise in automation and AI-based technologies has been a contentious subject for businesses and governments for a number of years. Although technology has always disrupted jobs, the scale and speed of these new innovations have the potential to either create mass unemployment or usher in a new age of job opportunity, depending on which study you read.

Last year, the chief economist of the Bank of England, Andy Haldane, warned of the "dark side" of technological revolutions in an interview with the BBC's Today Programme. He said that artificially intelligent machines that have both cognitive and technical skills could cause widespread and prolonged unemployment in the future.

A spokeswoman for the Department for Business, Energy and Industrial Strategy said: "Our modern Industrial Strategy is having a positive impact across all regions of the UK - driving investment and supporting businesses to create a thriving economy, now and in the future.

"Our modern Industrial Strategy is a long term plan that builds on our strengths in areas such as clean growth, whilst the introduction of the national retraining scheme and T-Levels will ensure people have the skills for the industries of the future."