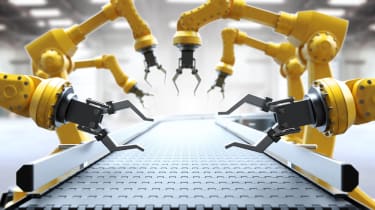 A group of MPs have warned that the UK is in danger of lagging behind the rest of the world when it comes to automation and robotics in the workplace.

Members of the Business, Energy and Industrial Strategy (BEIS) Committee said the government was putting jobs, businesses and the prosperity of whole regions at risk by cutting support and failing to encourage investment.

It adds further fuel to the never-ending debate over the impact of automated technology, such as robotics and AI, which is set to create or cull jobs, depending on your point of view.

Automation is already deeply embedded in a number of sectors like manufacturing, however, and its future use in certain workplaces is inevitable. According to Rachel Reeves, the Labour MP who chairs the BEIS committee, the government isn't doing enough to prepare for it.

"The real danger for the UK economy and for future jobs growth is not that we have too many robots in the workplace but that we have too few," she said, according to The Guardian. "The government has failed to provide the leadership needed to help drive investment in automation and robot technologies.

"If we are to reap the potential benefits in the future of improved living standards, more fulfilling work, and the four-day working week, the government needs to do more to support British businesses and universities to collaborate and innovate."

The cross-party committee's report, Automation and the Future of Work, has heavily criticised the UK government, specifically for scrapping its Manufacturing Advisory Service in 2015. This has made it difficult for businesses to get help and advice on automation, the report said.

The suggestion of a reduced working week, resulting in a greater work-life balance, is also heavily featured in the report, the idea being that robotics and automated software can aid workers rather than usurp them. This was also part of the committee's oral presentation in May, where MP Andrew Stephenson suggested there was evidence to support the theory.

"There is a myth here that machines and automation replace workers," he said. "If you look at what is going on in some of our car factories at the moment, machines are being used to help workers work longer by reducing the more stressful tasks that could only be done by somebody who is particularly young, fit and healthy. You are seeing a transformation into how automation can help our workforce, make them have more varied jobs, allow them to work more flexible hours, allow people to work longer in the workplace and enable more disabled people to come into the labour market."

While there may be examples of robots and humans working in harmony, there is still a number of demographics that will lose out to automation, as Stephenson said earlier during the same hearing, the "dirty, dangerous and dull" jobs are the ones most at risk.

For these people, the government has outlined a solution, the National Retraining Scheme, which is designed to help those sidelined by robots and AI to learn more future-proof work skills.