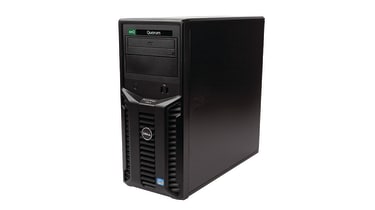 Supplied as a Dell PowerEdge T110 II tower server, the appliance regularly tests its own backups in the background to ensure you won't be caught out if something goes wrong.

Getting started with the onQ-T20 was almost effortless: the appliance integrated into our Windows test network in less than ten minutes, and our first backup was running five minutes later.

Setting up clients is a simple case of opening the appliance's web console on each system and clicking the Protect Me buttonto install the onQ agent. You'll be asked how you'd like protection and recovery to be configured, and then the backup kicks off.

With agents on our Windows Server 2012 R2 AD controller, Exchange 2013 and SQL Server 2014 systems, our first complete backup took around two hours. Once it was finished, the appliance created a recovery node (RN) for each system a complete VM kept permanently on standby for when it's needed.

Subsequent runs take only a few minutes; the agent takes incremental snapshots and updates the RNs with deltas. Schedules can be assigned to each system, ranging from 15-minute to 24-hour intervals.

Internally, the appliance runs Citrix XenServer, but you can ignore this, since everything is managed from the web console.

The dashboard provides a display showing activity and updates on the status of protected nodes and RNs, and you can choose how many snapshot versions to keep, along with the number of virtual CPUs and the amount of memory to be assigned to their RNs.

This is also where you can set the timetable for recovery tests: at scheduled intervals, the Quorum checks that each RN is readable and will boot up. If it fails, an email alert is automatically fired off. You can also run manual tests where the RN is loaded in a private network.

The only disappointmentis the onQ Monitor utility: it provides limited information about activity, along with basic pie charts showing backup and recovery status, but it's devoid of any useful reporting tools.

We tested Quorum by closing down our Exchange 2013 system and opening its RN in the production network, accessible via the system's connection status icon in the dashboard. In around five minutes, the RN had loaded and presented us with a perfect duplicate of our production server.

From our user's perspective, this might as well have been the real deal, as their profiles continued to work perfectly in both OWA and Outlook 2013. For simple file and folder recovery, we browsed the contents of the RN snapshots from the onQ console's Restore tab and copied them back to selected destinations.

Full system recovery is alengthier process. When webrought our original Exchange server back online, we had to boot it from the Windows PE-based Quark (Quorum Ultimate Automated Recovery Kit) ISO, which we downloaded from the appliance, in order to synchroniseall the changes made while the Exchange 2013 RN was in use.

After connecting the Quark recovery environment to the onQ appliance, it took around an hour for all the latest changes to be applied to our Exchange 2013 server.

The onQ-T20 can store up to 1.25TB of data and comes with an unlimited server licence, but Quorum recommends it for no more than two recovery nodes: after all, these VMs require a certain amount of CPU power and RAM, and also need as much disk space as the original production system.

Even so, the one-click backup and automated recovery testing make this a great choice for situations where failure is not an option.

The one-click backup and automated recovery testing make this a great choice for situations where failure is not an option.