Agent deployment could be smoother, but Unitrends scores highly for client support, features and value 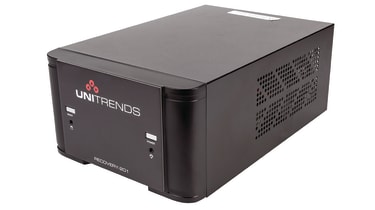 The Unitrends Recovery series of appliances promise backup and recovery with no hidden costs.

They'll protect all your servers, clients, OSes and apps out of the box, so the only calculation to be made is how much data you need to protect, and whether you need redundancy and hence which model to choose.

The entry-level Recovery-201 is a compact desktop unit that comes with the Unitrends software preinstalled. All key features are enabled, and it supports Windows, Unix, Linux and OS X; applications such as Exchange, SQL Server and SharePoint; plus Hyper-V and VMware environments.

Storage in this model is handled by a single 1TB SATA hard disk; if you want local redundancy, consider the larger models which have mirrored or RAID5 arrays. The Recovery-201 provides up to 600GB of usable backup space, which is stretched as far as possible by inline compression and block-level deduplication.

The appliance also offers one USB 3 and four USB 2 connectors, which can be used to archive data off the appliance. iSCSI LUNs and NAS shares are also supported, and the Unitrends CloudHook feature supports Amazon S3, Google and Rackspace for cloud archiving.

Setup took ten minutes, but agent deployment was a lengthier process. Due to security changes made by Microsoft, the agent-push function doesn't support Windows Server 2012 R2 or 8.1 systems, so we had to install the agentmanually on these systems, then add the clients from the console with the "Establish Trust" box unchecked. The appliance was also aware of Hyper-V and Exchange 2013vand, with the latest updates installed, SQL Server 2014.

The default "incremental forever" backup method runsone master backup when a system is first connected, then follows it with regular incrementals as often as every 15 minutes.

However, if you wish, you can configure custom settings using master, incremental, differential, selective and "bare-metal" backups, which can be further customised with inclusion and exclusion lists.

With automatic settings, our Exchange 2013 and SQL Server 2014 databases were secured without any problems. Backups of our Hyper-V VMs could also be scheduled, and these occurred regardless of whether the VMs themselves were running or shut down.

Performance proved variable: a Windows 8.1 Hyper-V VM Master backup averaged 27MB/sec, but Exchange database backup was much slower, at 17MB/sec. A 70GB Master system backup of our Windows Server 2012 R2 AD controller took almost two hours, but was squashed down to only 40GB, and subsequent incrementals completed in less than five minutes.

Recovering files and folders is quick and easy: from the console, we chose a machine, picked a recovery point and watched as a 1.2GB folder was restored to a Windows serverin only 65 seconds. Our Exchange database was just as easy to reinstate, but message-level restoration requires additional tools, such as Kroll Ontrack.

The Unitrends Instant Recovery feature can also create a VM from a system backup and host it on the appliance, but the low- end Recovery-201 lacks the power to do so. What you can do, however, is build a VM from a backup and run it on a Hyper-V host system.

Users can also be permitted to run their own backup and restore jobs, but the local agent interface has been deprecated and no longer works. Therefore, we had to go into the appliance's own interface to configure users, grant them access privileges and allow them to use the web console on their machine.

Hiccups such as this reflectthe fact that the Recovery seriesis going through a transitory upgrade phase, but none ofthem are insurmountable. The Recovery-201 is still a decent choice for small businesses that want total protection at a rock-bottom price.

The Recovery-201 is a decent choice for small businesses that want total protection at a rock-bottom price.