Central management features are limited, but a decent choice for small businesses on a budget 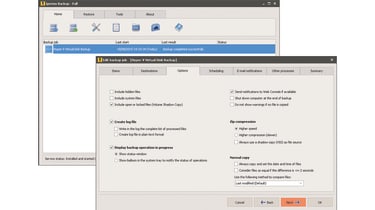 One immediate point in Iperius Backup's favour is that the basic version is free. And yet it's not short on features, supporting all Windows desktop and server OSes, with no limits on the number of backup jobs you can run. It also supports a healthy range of destinations including hard disks, RDX drives and NAS shares.

However, if you want to unlock the program's full power, the upgrade costs 191 per system. This is a decent price, adding plenty of extra data-protection features, including support for tape drives, disk imaging for disaster recovery and VSS open file backup.

SQL database backup is available too, and cloud-storage options extend to Google Drive, Dropbox, Microsoft OneDrive,Azure and Amazon S3, as well as support for FTP servers and Iperius' own cloud storage. What's more,all paid-for versions, except Desktop, can be remotely managed via the Iperius web console.

Installing the software on a Windows Server 2012 R2 host took less than a minute. No remote- deployment tools are provided, however, so we had to do this by hand on every system we wanted to protect. The web management console, which costs 62 per year, supports up to 50 systems: each one had to be linked to

our account with a personal code, but then we could view the status of all backup jobs, run existing jobs, view logs and push client updates to registered systems.

Creating backup jobs also requires a visit to each system, and this can't be done from the web console. Even so,it didn't take long: a wizard guidedus through choosing sources, picking a backup strategy and using the powerful scheduler tool.

Full backups and regular incrementals are both supported it was easy to create one job that ran a full backup followed by regular incrementals, and decide on the number of file versions to keep. For backup destinations, we could choose from local volumes and NAS shares mapped to a local drive letter. We also tested using an IP SAN andan FTP server on a Synology storage appliance and had no problems.

You can also choose whether or not to include system files in your backups, and optionally use VSS to secure open files. Pre- and post- backup jobs can be configured, and the host can be shut down or rebooted after the backup has finished.

Securing our SQL Server 2014 host wasn't difficult. We used the client to browse for databases, and found we could select all of them or individual ones. Restoring them was just as easy we browsed the backup location to pick a database, and had the option of restoring it to its original location or elsewhere.

If you don't choose the Zip option in a backup job, you can also restore files and folders natively using drag-and-drop. The client provides facilities for viewing the contents of archived backups, tape drives, FTP servers and cloud storage.

One weakness of Iperius Backupis Exchange protection. There are no facilities for data store or mailbox backup, so item-level mailbox restores areoff the agenda. All we could do was secure its database files with a standard backup job.

Similarly, while Iperius supports backing up VMs on VMware ESXi hosts, it has no specific abilities for Hyper-V. The free version simply lets you back up your Hyper-V virtual disk files, while the paid-for version adds VSS hot backups of running VMs.

The limited central management console makes Iperius Backup best suited to SMBs looking to protect a small number of servers. The lack of Exchange support might also count against it, but Iperius Backup is easy to use and surprisingly powerful.

The limited central management console makes Iperius Backup best suited to SMBs looking to protect a small number of servers. The lack of Exchange support might also count against it, but Iperius Backup is easy to use and surprisingly powerful.