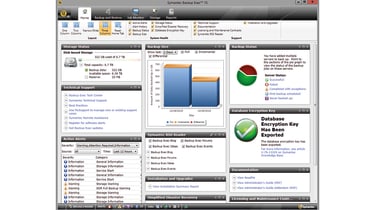 Backup Exec was acquired by Symantec in 2005, but it's now been sold off the latest version is back under the old Veritas brand. The new management says it aims to dedicate more development staff to the product, and to deliver major updates more rapidly than Symantec did.

So far there's been no change to the front-end management console, which caused such a furore when it was launched in Backup Exec 2012. It's easy enough to use, but we still advise users planning to upgrade from earlier versions to test it before taking the plunge, because it's radically different.

However, the licensing scheme has been streamlined: Veritas recommends its Capacity Edition Lite for SMBs. Starting with 1TB of uncompressed backup capacity, this gives you every feature of the software, save for Mac support, deduplicationand multi-drive tape libraries.

Installing Backup Exec 15 (BE15) on a Windows Server 2012 R2 system took us around 30 minutes. We then used the console's wizard to push agents out to our Hyper-V system, hosting Exchange 2013 and SQL Server 2014. Next, we configured our backup storage: for testing, we used multiple IP SAN targets on a Synology storage appliance, connected tothe backup serverover 10GbE.

BE15 employs a resource-centric model designed to reduce the steps needed to create a complete backup strategy. From the Backup And Restore tab we selected the servers we wanted to protect and chose a strategy from the dropdown list.

Choices are based on defined storage and active licences it was easy to create a backup-to-disk job, with extra disk or tape staging for all our servers, with just a few clicks. Our new job defaulted to starting witha full backup followed by daily incrementals, but we could modify these to suit and change the backup sources, destinations and schedules, as wells as replace incrementals with differentials and add further stages.

Our Hyper-V VMs were handled smoothly. After we'd declared the host to BE15, it went away and loaded the relevant agents onto the host, and onto our Exchange 2013 and SQL Server 2014 VMs. Slightly confusingly, it added separate entries for both VMs in the server list, but when we tried to use them to create a backup job, BE15 told us to select the host instead.

That aside, the Hyper-V host backup worked fine, and during job creation we enabled the granular recovery options for both the Exchange and SQL Server VMs. This adds wizard-driven options to restore files, folders, Exchange mailbox items and selected SQL databases residing in the VMs.

It's good to have the Job Monitor back in its rightful place (it was removed in BE12 but restored in last year's update), which let us keep a close eye on our backup and restore tasks. Two panels show running jobs and job history, and we applied filters to each panel to refine the information displayed.

Data restoration is nicely streamlined: when we selected a server, BE15 presented only the relevant options for this system. For our standard Windows servers, we had the option to restore files and folders, while the Exchange wizard provided extra choices for restoring the entire data store or individual mailbox items.