Lets you choose your own cloud backup provider, and is well suited to Amazon Web Services users 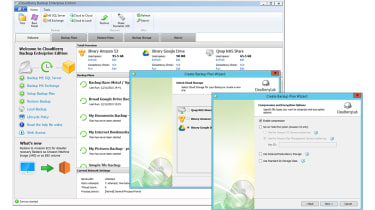 Cloudberry Labs puts a new spin on cloud backup. It provides the tools to secure your Windows systems and business apps, but leaves the choice of storage provider up to you. And there's plenty of choice: the Cloudberry Enterprise Backup (CEB) software on test currently supports more than 50 providers.

The CEB console is well designed and installation was completed in less than 30 seconds, requiring only that the client be activated with a licence. We could then start creating our cloud backup accounts.

We chose to store our data on Amazon S3. We entered our access and secret keys, after which CEB displayed a list of our buckets and let us create new ones in the Amazon data centre. If you feed it the price per gigabyte of cloud storage, CEB will provide ongoing charge estimates on its dashboard and halt backups if they go above a predefined cost.

Cloudberry's cloud expertise was obvious when we created a backup job for our Amazon account. CEB helps with the Amazon Web Services (AWS) Import/Export feature so you can copy data to a USB device for seeding and it'll prepare a packing slip to send it to your selected data centre.

The advanced mode offers up to AES-256 encryption and block-level backup, while the simple mode uses Amazon's server-side encryption and allows data to be accessed directly from the AWS Console. Furthermore, we could have placed multiple files in one archive to reduce the number of cloud requests and cut costs by using Amazon's Reduced Redundancy Storage for non-critical data.

CEB can back up data from a cloud vault to a local drive, and even from one cloud provider to another. It can also convert an image backup to an Amazon EC2 Windows Server instance for quick cloud disaster recovery.

CEB doesn't have a central management console, and must be installed separately on every system you want to back up. A single perpetual licence costs 198, which drops to 165 each for five to nine licences and, of course, you'll need to factor in costs for cloud storage.

We ran mail-store backups on our Exchange 2013 system running CEB, but brick-level backups aren't supported. However, we had no problems securing our SQL Server 2014 databases, or running image-based and bare-metal backups of selected servers.

We used the File account type for hybrid backups. These could be pointed at any storage our servers could see, which included IP SANs, NAS shares and other local volumes. There's also an account type for FTP/ FTPS servers.

Local performance can't be faulted. The initial full backup of a 25GB file to a NAS share averaged 51MB/sec and a 22.4GB mishmash of 10,500 files backed up at an impressive 61MB/sec. Restores from the NAS share were fast, too, with our 25GB test file recovered at an impressive 94MB/sec.

We could apply encryption to file account backups and, for additional security, CEB doesn't store the key (so make sure you record it). Choosing simple mode backed up our data natively, after which we could use Explorer to view our NAS repository and restore selected files.

A central console would make it easier to administer multiple systems, but Cloudberry Enterprise Backup scores well for ease of use and hybrid backup features. It really shines with its cloud support and is ideal if you don't want to be tied to one provider.