Retrospect Backup has always had a laser-sharp focus on protecting SMBs and its flexible licensing scheme allows them to tailor the product precisely to their environment. You can start with the base Single Server package which costs 599 and backs up one Windows server plus five desktops and scale right up to the Multi-Server version on review which supports all the Windows, Mac and Linux servers and desktops you can eat.

Installation on a Windows Server 2019 host was a swift affair but clients have to be manually installed on each system you want to protect. Even so, it doesn't take long and the host software provides a client discovery service.

The main console hasn't seen any design changes for over a decade but we found it still works well enough. Your first task is to create backup sets which define destinations and can be anything from a tape or DVD to a local disk vault, removable drive, NAS share or cloud storage with Retrospect's support including Dropbox, Amazon S3 and Google Cloud Storage.

For backup job creation, you select sources such as local disks and remote systems running the Restrospect client utility, pick volumes or files, choose a backup set and apply a schedule. No need to worry about choosing backup types as all jobs start with a full one followed by progressive backups that only copy new and changed files.

The new storage groups feature overcomes a disk backup set limitation where only one write operation is permitted. Storage groups function as containers where you add multiple disk vaults as folders and point your backups at the group allowing jobs to run in parallel. 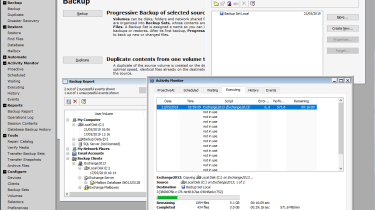 Agent-less backup for VMware and Hyper-V hosts is not supported so you'll have to load the client inside each VM and treat them as physical systems. An alternative is to use the Retrospect Virtual solution but this is a completely separate product that has no integration with the Backup software.

You'll also need it if you want GRT (granular recovery technology) restores for Exchange 2016 and 2019 hosts as Retrospect Backup only supports this for mail servers up to Exchange 2013. For the latter, we had no problems securing our mail host over the network as Retrospect discovered its client and allowed us to back up the system, database and mailboxes.

Recovery operations are wizard-driven where you choose a backup source, select volumes, folders, files, databases or mailboxes and decide where to restore them to. For disaster recovery, the console guides you through creating a bootable flash drive or ISO and associating it with a backup set after which it can be used to restore a sick system.

Management facilities see big improvements as along with the backup host's dashboard utility, Retrospect has an iOS app for monitoring selected backup servers plus a cloud portal service for keeping an eye on multiple, distributed hosts. Real-time host monitoring is free while support for multiple organisations and facilities to remotely deploy backup job scripts requires an add-on which costs from 119 for one host.

Limited support for virtualized environments takes the shine off Retrospect Backup as using the separate Virtual solution will simply add to the support burden and cost. That said, SMBs that want an easily managed backup solution for protecting physical servers and desktops at a great price will find Retrospect worthy of consideration.

Retrospect Backup’s limited support for virtualised environments is a disappointment, but if you want an easily managed backup solution for protecting physical servers and desktops, it’s a worthy contender at a good price.