What Sheryl Crow can teach us about data protection 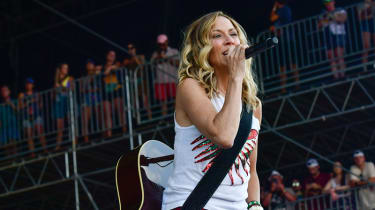 One of the strangest concerts I've ever been to was the closing party for CA World 2015. The event was headlined by Fallout Boy, with Sheryl Crow supporting a clash of styles that resulted in a room full of middle-aged IT managers who had come to see a 90s country pop star awkwardly rocking out to late-2000s emo pop rock. Little did I know at the time, however, that Crow would one day provide a perfect object lesson for those same IT managers in how poor data protection practices can backfire horribly.

It was recently revealed by a New York Times report that the master tapes of Crow's back catalogue along with those of countless other artists, or even entire record labels were wiped out by a devastating fire at Universal Studios' Hollywood backlot in 2008. Among the structures consumed by the blaze was 'Building 6197', AKA 'the video vault'.

As well as a large library of film reels belonging to Universal and its parent company NBCUniversal, the building also housed a substantial collection of the master tapes belonging to Universal Music Group (UMG), the largest record company in the world. An irreplaceable archive dating back to the 1940s, the collection included the original multi-track session recordings from which remasters and re-releases are constructed, including legendary artists like Tom Petty and Muddy Waters, as well as smaller seminal labels like Chess, Impulse and Geffen.

Crow told BBC News she was devastated when she learned her tapes had been destroyed, and expressed her shock at the lax backup procedures that had been put in place to protect them.

For IT professionals, this incident highlights the importance of data protection's cardinal rule: always keep your backups separate to the original version. The simple reason for this is that, if disaster strikes, only one of them will be lost. A sensible and obvious safety precaution, one might think, but clearly one that's easy to overlook after all, one of the world's biggest music conglomerates forgot to follow it when it came to protecting hundreds of thousands of priceless historical recordings.

UMG, at least, could hide behind the excuse that digitising analogue tapes is a costly and time-consuming exercise -- IT admins can back up their entire estates automatically with simple tools and services, so there's no such excuse for not protecting yourself.

The catastrophe cost Universal Music Group an estimated $150 million, not to mention the cultural impact of masters from artists Billie Holliday, Chuck Berry and Soundgarden being wiped from existence. The real tragedy, though, is that it could have been avoided if the company had followed basic data protection guidelines.

Sheryl Crow will never get her lost masters back, and neither will the numerous other artists who are mounting a class-action lawsuit against UMG over its failure to protect their work.

"There are many songs on my masters that haven't come out," she told BBC News. "My peace of mind in knowing I could come back someday and listen to them and mine those [sessions] for basement tapes and outtakes, is gone."

It's too late for Sheryl and the other artists affected by the UMG vault fire; their data is never coming back. It's not too late, however, for you to learn from the sad story of Sheryl Crow and take a long look at your own data protection practices.