Apple slows its own devices as much as the dwindling battery does, says Barry Collins 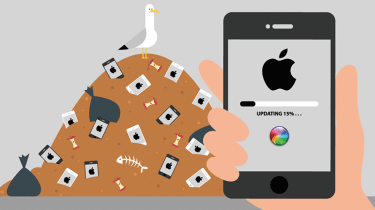 So it's not just paranoia Apple does deliberately hamper the performance of older iPhones. Except this isn't a ruse to sell you a grand's worth of new iPhone perish your cynicism! Instead, Apple's doing you a favour, preventing your knackered old battery from crashing the phone when it's doing something demanding. And yet that's not quite the truth, the whole truth and nothing but the truth. It's a Cupertino-varnished version of the truth that still doesn't explain why every Apple device I've ever owned has been slowly reduced to landfill.

Apple's admission that it's crippling the performance of older iPhones will come as little surprise to anyone who's ever owned one of the things. Get past the two-year mark conveniently, when most contracts come to an end and you're lucky if the battery gasps on until tea time. Performance becomes so sluggish that you begin to wonder if Apple's been taken over by Southern Rail.

Having been caught in the hobbling act by some clever folk and their inconvenient benchmarks, Apple is now trying to spin this as a feature. "We have never and would never do anything to intentionally shorten the life of any Apple product, or degrade the user experience to drive customer upgrades," Apple pleads in a public message to customers.

Instead, to prevent the phone from suddenly blacking out, "iOS dynamically manages the maximum performance of some system components when needed to prevent a shutdown," Apple explains. "While these changes may go unnoticed, in some cases users may experience longer launch times for apps and other reductions in performance."

What Apple fails to mention is that it's the successive updates to iOS that cause performance problems in the first place. When I first bought my iPad Air, apps would open in the bat of an eyelid. Now, three major versions of the operating system later, I have to wait several seconds for anything to happen, often longer. Scrolling through web pages is juddery, app crashes are frequent, battery life is dwindling faster than my chances of winning Miss World -- and the exact same thing happened to my iPad 2, which is now barely operable.

Apple's relentless almost compulsory operating system updates do more damage to device performance than anything else. You could argue that's the price of progress and a better state of affairs than the Android market, where devices are often left to drift on outdated versions of the operating system within a year of being launched.

But for Apple to pin the blame for slumping performance on the "characteristics of battery chemistry" is at best disingenuous, at worst a cold deception. If it took greater care to ensure operating system updates for older devices were less demanding of ageing hardware, iPhones and iPads would last a great deal longer.

Apple is now trying to make amends by offering owners of ageing iPhones replacement batteries on the cheap. Us owners of older iPads can seemingly go whistle.

It's time to stop thinking that we "own" devices such as iPhones and iPads. You're really buying a two-to-three-year lease on a piece of hardware that Apple can and will effectively cripple at a time of its choosing. Apple says its "customers' trust means everything to us". Apparently, their repeat custom means a whole lot more.