In a race where seconds count, AkzoNobel racing team turns to the Raspberry Pi and SAP for help 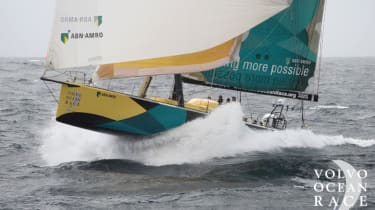 Covering more than 45,000 nautical miles, across four oceans and touching upon six continents, the Volvo Ocean Race is one of the world's most gruelling endurance sailing challenges. Sailing teams face up to 118 days sailing with jaunts away from the shore lasting up to 21 days.

All seven of the 65ft yachts in the race are identical; there's no leaning on superior hull design or expensive gear that another rival team can't afford. This is a true test of sailing prowess resting firmly on the sailors competing in the race.

Knowing this, Dutch team AkzoNobel decided to turn to technology to gain an edge in the race, tapping into one of the most nascent technology trends around; the Internet of Things (IoT).

The team had been collecting data from a myriad of sensors dotted across its boat for years, but it wanted to create a new system that could better track its sailors' performance. And that system had to work in real-time and out on the high seas.

"We're looking for any percentage gains we could find and one of the areas we saw that was how can we utilise crew biometrics to then help improve race performance off-shore," says Ryan West, performance director for AkzoNobel's technology team, speaking to IT Pro.

This was no easy task - early attempts experimented with chest straps which, as West noted, was impractical for tracking biometrics as it required sailors to wear cumbersome hardware for days on end.

Moreover, the stringent rules of the race mean teams are blocked from communicating back with their onshore counterparts to exchange data that could be used to guide performance or race tactics; all the teams are really allowed to do is fire off the odd update email.

Knowing that data is a key factor in gaining a competitive edge, AkzoNobel turned to SAP's Leonardo, a technology consultancy and IoT systems arm of the business software giant.

The biggest challenge was the need for a self-contained system that didn't simply collect data but could conduct analytics at the same time and serve it up to the sailors while they were out at sea.

The solution to this problem was to have a two-tiered system with SAP's IoT technology at its core, one for the boat and another for the onshore team.

The data collection process is relatively simple. Sailors are given Garmin smartwatches which monitor their heart rates through the use of an app custom made by SAP. That data is then collected on the smartwatch while the sailors are on deck, and when they go below to rest or eat, the data is transferred via Bluetooth to an Android smartphone that acts as a bridge to pass the information on to a Raspberry Pi.

At first glance, this might seem like a very basic way of collecting heart rate data, but such information can tell a lot about a sailor's health and performance.

"Purely from heart rate, we're actually able to calculate out calories per day they [the sailors] burn, and sleep pattern as well," explains West. Previously the sailors would log their sleep and nutrition in paper logs, which were not only time consuming but reliant on estimates rather than accurate data.

But it's the use of SAP's Leonardo IoT Edge platform on the Raspberry Pi that allows the harvested data to become truly valuable.

Edge of the tech world

Embracing the concept of edge computing, whereby data processing and analytics are carried out locally on IoT devices rather than piped back into a central system or cloud, Leonardo IoT Edge crunches the smartwatch data in real-time and presents it to the sailors through a custom user interface and an onboard tablet.

This means useful data can be supplied to sailors all without any communication with onshore systems, as per the rules of the race.

"It's not just about taking data, sorting data and synchronising back data, what we're actually doing is performing analytics at the edge, and actually doing the compute at the edge and that's fundamentally different and really quite exciting," says Nick Forde, SAP IoT evangelist.

Though this is the first race in which AkzoNobel deployed its custom biometrics and IoT system, the team is already seeing the benefits of having automated, real-time analytics served up on the edge. The sailors are able to see who in the team is not getting enough sleep, for instance, and can adjust taxing 'watch' shifts to ensure each sailor is in the best possible shape they can be when battling all manner of sailing conditions.

Onshore SAP provided AkzoNobel with its HANA cloud database platform with predictive analytics and reporting capabilities on top. The system was tuned for serving up insightful information out of the harvested biometric and yacht data, which syncs back with the HANA cloud once the boat is ashore - thereby operating within the rules of the race.

With all the data in the HANA cloud, AkzoNoble's technology team can get to work analysing it and spotting patterns in sailors performance and sleep rotations.

"We're able to see the environmental cause and effect on what going on for these sailors," said West, noting how the system identified the sleep of one sailor changed noticeably in relation to the local time of day, despite the team rigorously following Coordinated Universal Time.

Through the use of predictive analytics, the tech team is able to predict certain quirks in sailors sleep and performance patterns, and offer advice to how they might better perform, such as changing sleeping positions for those sailors struggling to rest.

Predictive models created onshore can also be loaded into Leonardo IoT Edge on the boat's Raspberry Pi, allowing analytics to be carried out on the boat rather than onshore and in-between the different legs of the race.

This concept surrounds the idea of architecting technology in a directly useful and meaningful fashion, rather than embracing digital transformation because it's 'the done thing'.

West pointed out that currently, AzkoNobel is the first team to use such an edge IoT system and that it's currently building a dataset to analyse. Changes in the race performance are therefore only going to be in single digit percentages, though even a 2% change over a 118-day race can mean the difference between victory and defeat.

"We're still in that cycle of finding small things to tweak and make more valuable," says Watch Captain Chris Nicholson and veteran race sailor Chris Nicholson, who has been waiting some 16 years to have access to such accurate sailor and biometric data.

"Having this data raises so many questions for us, which to me shows its potential because each question can directly end up giving a speed gain at some stage in the future."

The hope is to use predictive models in future races, particularly when it comes to forecasting the weather and deciding on the most optimal route - going too fast may prove too taxing on the crew, but an inefficient course may cost them the race.

While the use of Leonardo IoT Edge in a brutal sailing race is a rather extreme example of how the IoT can benefit an organisation's operations, it serves as a good example of how the technology can be honed to address certain challenges and open up insights that were previously hidden from view.

"If you can digitise these traditionally analogue moments, suddenly you can understand how that powers your organisation forwards to perform the types of analytics you want to," says Forde.

However, Forde highlights that such an approach needs to be taken with a clear and grounded objective in mind; there's no sense collecting data for the sake of it unless it can be used effectively.

"The goal of what we're trying to do is help people make sense of all the enormous volumes of data that are available right now and understand on how they can act on that and evolve and grow their business to stay relevant and competitive in the world today," explains Forde.

AkzoNobel may have demonstrated that in the sailing world, but there's clearly a lot of scope for carefully considered digital transformation and IoT adoption - technology that can shift an ailing business into an enterprise that others aspire to be.