From the Peloton to the Cloud: How data keeps the Tour de France running 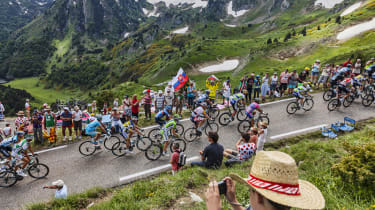 To suggest the Tour de France is the most famous cycling race in the world borders on understatement. Founded in 1903 as a vehicle to sell more newspapers, the event attracts millions of spectators from around the world on television and at the roadside every summer.

In the early years of the race, fans would find out the result of each stage in the following day's newspaper. But as times changed, this became increasingly unacceptable.

The first live radio broadcast of the race aired in the 1920s and highlights were made available to television and cinema newsreels the day after a stage. In 1948, the Tour was broadcast live on television, although only certain stages were shown initially.

Fast-forward to 2019 and public demand has changed once again. Every stage is shown live, while the rise of the smartphone and social media means fans are demanding more coverage and more information about every facet of the race.

The Tour is a national obsession in France and is of huge cultural importance. But its organiser, the Amaury Sports Organisation (ASO), is acutely aware of the need to ensure the race retains its relevance and attracts new audiences many of whom may be oblivious to the quirks of professional cycling.

As with so many other sports, digital is now a priority for the ASO. But for an event that comprises 3,408km across 21 stages and is contested by 176 riders, it's an extremely complex operation. Big Data, artificial intelligence (AI) and the cloud are all integral to the Tour de France's digital transformation.

In 2015, the ASO partnered with NTT to improve the level of data that can be extracted from the bikes and the course, which can then be analysed and turned into insights that drive engagement through race commentary and on digital platforms.

The Tour is littered with jargon such as domestique and peloton, while race rules and cycling tactics are unique from many other sports. These need to be explained to casual observers, while more seasoned fans will want in-depth analysis from television. Fans at the roadside, meanwhile, will want real-time stats to improve their experience.

Data is therefore key to engaging all groups. Organisers have been able to record data such as bike speed and position for ten years but lacked the ability to collect it in real time, making it relatively uninteresting for the media.

"In 1999, the ASO added trackers because it knew sport would become digitised. The issue was the underlying network problem how do you get the data in real time?" says Noelani Wilson, part of the NTT team at the Tour de France.

Previously, the only data available to spectators was a chalkboard carried on a motorcycle featuring approximate time gaps calculated by a stopwatch.

"It was the most rudimentary form of data collection and only catered to people watching on TV," Wilson explains. "The fans got to see some of it from the roadside but it didn't reach the masses and didn't capture the experience of the Tour."

Once NTT got on board in 2015, it managed to find a way to extract this information. Every bike has a mobile phone-sized device fitted underneath the seat, housing a GPS chip, radio and battery. A reading is taken from every second from every rider to be analysed in the cloud. 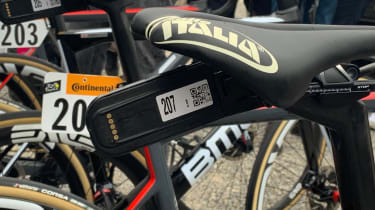 The radio transmitters on the bikes, and on the race vehicles, create a mesh network to transmit the readings using white spaces gaps in spectrum reserved for television. Because the RF equipment used is low power, the risk of any interference between it and the TV broadcasts is low.

The live readings are sent from the bicycles to helicopters used to provide television pictures and then relayed to an antenna on a cherry picker located next to NTT's tech truck at the stage finish line.

Orange, another partner of the ASO, has committed to installing fibre at every finish location. This means NTT can send the data coming in at 150 million data points per stage to the cloud for analysis within 400ms of receiving it.

The power of the cloud

As the data comes in, it's sent to data centres in Amsterdam where NTT's algorithms can get to work.

Aside from real-time information for the broadcasters, the data is visualised for social media and digital platforms. This includes heat maps that visualise sprint finishes better, average speed graphics, and animations. A big moment for the team was in 2015 when a visual showing the speeds of riders involved in a major crash went viral. All of this is posted on a dedicated "Le Tour Data" Twitter account.

"We put the data through to different channels depending on who needs it," explains Wilson. "TV needs real time data so there is minimal visualisation.

"We pilot new innovations on social media as it's a quick way to see if something works: It helps fans understand more and adds context to the race. Once we've got something right, we'll send it to broadcast." 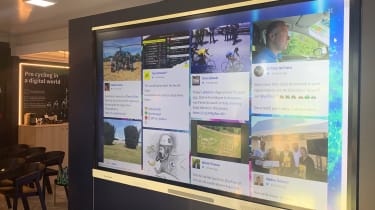 Data is also fed to the official website and mobile application of the Tour de France, meaning roadside spectators also benefit. For example, the app uses a smartphone's GPS and pairs it with race speed data to give the user an accurate prediction of when the race will reach their location.

The tech truck, meanwhile, is located in the broadcasting zone at the finishing line, meaning conversations with the host broadcaster are easy.

Thanks to the cloud, there is also much less equipment than there would be otherwise. Whereas previously there would need to multiple systems and myriad cables installed, all the tech trunk needs to operate are screens, computers and a link to the fibre network.

The cloud also gives NTT the ability to experiment with machine learning. For example, the "Man v Machine" algorithm crunches rider and stage data to predict the ten most likely winners of a certain stage.

It has a 70% success rate but will never be perfect because it's impossible to predict events like crashes or a sprinter getting boxed in near the finish.

This was in evidence during Stage 19 in 2019, when NTT predicted Frenchman Thibaut Pinot would win the stage, only for him to withdraw from the race that day due to injury. In fact, there was no winner at all because organisers abandoned the stage part way through due to a hailstorm causing flooding and mudslides a freak occurrence that could never be reasonably accounted for.

NTT also provides advanced video analytics for the broadcasters. It's possible to overlay positioning data onto a video feed in real time, helping commentators to identify riders in the peloton or to show the speeds of riders in an attack.

For this feature to be useful, it was necessary to introduce three-dimensional tracking so riders descending a winding road could be placed in the same group one of the biggest challenges that NTT faced.

"It's about understanding patterns," says Etienne Reinecke, NTT Group CTO. "Machine learning can do far more than what we can. Over the course of a Tour de France, the software makes 100 trillion decisions. You can't do that with people. Getting real time accuracy through data is huge."

Machine learning is now being used to predict the probability of key events. "Le Buzz" analyses video footage to predict attacks, a change in pace or even a crash. For example, an accident might be more likely on cobbled roads or near a feeding station.

This raises a question about ethics. If NTT can predict the likelihood of a crash, then shouldn't it warn the riders?

"We're not interfering in the race," replies Reinecke. "We send data to the ASO, but racing is always dangerous."

Away from fan engagement, the data helps the ASO manage the race. As mentioned, the Tour is constantly moving and organisers have to make on-the-fly decisions without having a full idea of what's happening across the race.

NTT provides the data to official race cars through an in-app dashboard so they can make more informed decisions. Rather than sending data to Amsterdam, NTT makes use of edge computing to improve reliability and lower latency even further. 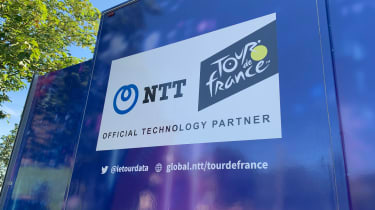 "Because we don't want to rely on the overall processing route, we put a smaller version of the dashboard on a car with an edge processor," explains Reinecke.

An example of this in previous years was when organisers saw Mark Cavendish, the holder of the green jersey (awarded to the best sprinter), was in danger of missing the cut after a difficult mountain stage.

The ASO couldn't have a situation when the jersey holder was forced to leave the race, so it adjusted the cut-off point to allow more riders to finish the stage.

Looking to the future

The partnership has been a success for both parties. For NTT, the Tour de France is a useful testbed for new innovations and a demonstrator for what it can do for other businesses, while the ASO has dramatically expanded its digital reach.

Since 2015, the Tour de France has increased social media followers from 2.7 million to 8 million, while video news viewers have increased 1,000%. Television viewing figures are stable, but there is a recognition that the ASO needs to move beyond the traditional broadcast revenue model in the future. Digital platforms and the monetisation of data are central to that goal.

However, the amount of data that the ASO is able to collect will likely be dictated by politics and ethics. The biggest question is who owns the data. Is it the ASO, because it organises the race, or the teams because they compete? Maybe it belongs to the individual riders? It's a question that will likely be raised in other industries and other walks of life in the near future.

The two parties have extended their partnership until at least 2024 and NTT is already working on additional innovations. It has held internal Code de France hackathons to identify new ways to drive engagement, as well as building a prototype augmented reality (AR) application that overlays real-time positioning data on a 3D model of the stage topography.

As part of their future plans, NTT and the ASO want to devise a "smart stadium" concept for an event that takes place on ordinary roads.

"Analytics, data and AI are leading cycling from analogue era into a digital era," Reinecke says.

For a race that initially started as a publicity stunt to sell more copies of L'Auto, it's no surprise that the Tour de France still yearns for coverage in the digital age.