Human rights groups have called it a "disturbing move", citing concerns about the US company involved 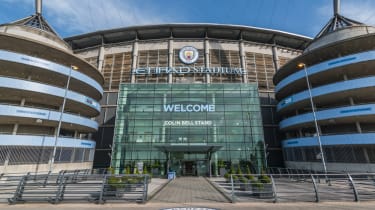 The Premier League champions have suggested installing the technology in the Etihad stadium to speed up the entry process, allowing fans to get into the home games by scanning their faces instead of using paper tickets, according to The Sunday Times.

However, Liberty has called it a "disturbing move" suggesting it subjects football fans to intrusive scans just so they can watch a football game.

There are also questions being asked about the company City have reportedly hired to implement the technology - Texas-based Blink Identity.

Hannah Couchman, the policy and campaigns officer at Liberty, told The Guardian: "It's alarming that fans will be sharing deeply sensitive personal information with a private company that boasts about collecting and sharing data on each person that walks through the gate and using this to deny people entry.

"Manchester City should urgently reconsider their involvement in normalising a mass surveillance tool which can track and monitor us as we go about our everyday lives."

City's Etihad stadium has a capacity of 55,097 and as the home of the reigning Premier League champions, is regularly sold out. IT Pro has contacted the club for comment.

Blink Identity says it has been building and deploying large scale biometric identification systems for the last decade, starting in the Middle East for the US Department of Defense, and more recently to commercial markets for security and access functions.

The company says its technology is "revolutionary" and can track users at normal walking speed. The system works in half a second (a blink - hence the name) and doesn't require the user to look directly at the camera, rather it captures you as you enter.

It also calls it "privacy-first facial recognition", stating that "privacy is part of our culture". While Blink Identity claims to be ethical and transparent with your data, there is little information on their website about what actually happens to your data - it says it deletes data if it doesn't have an agreed-upon "business use" but does store some personal data.

From the perspective of personal data, facial recognition has presented a problem for regulators. Recently, the ICO announced it was looking into facial recognition deployment by police, as well as its use by a property developer at King's Cross.

This is not the first time the technology has been used in football. The South Wales Police deployed the technology at the 2017 Champions League Final in Cardiff. That was part of a wider trial, which included the Metropolitan police which proved controversial, partly due to how unsuccessful it was.