Kodak shares rocket as it reveals blockchain and Bitcoin initiatives

But experts question Kodak's cryptocurrency plans, which include KODAKCoin to pay photographers 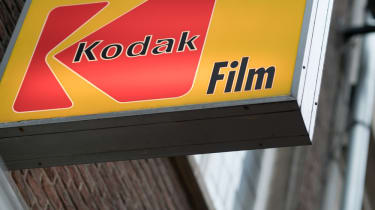 Kodak's shares have more than doubled on the news it plans to launch its own cryptocurrency and establish a Bitcoin mining farm with a view to sharing profits with its customers, as part of a wider strategy for embracing blockchain technology.

The famous New York-based photography firm said yesterday that it is partnering with WENN Digital, a technology arm of London's WENN Media, to create a digital ledger built on blockchain to manage ownership rights attributed to photographers.

The move is an attempt to create a more robust and versatile system to allow photographers to more easily control their licences and receive payments for their work through the introduction of the KODAKCoin.

News of the blockchain initiative caused shares to jump from $3 to $6.80 at the close of trade yesterday, a rise of 119%.

"For many in the tech industry, 'blockchain' and 'cryptocurrency' are hot buzzwords, but for photographers who've long struggled to assert control over their work and how it's used, these buzzwords are the keys to solving what felt like an unsolvable problem," said Kodak CEO Jeff Clarke.

Details of a separate scheme were also announced at CES 2018 this week that will see the company establish its own Bitcoin mining farm at its headquarters in Rochester, New York. The scheme, called the Kodak KashMiner, will allow customers to pay upfront rental costs to mine for Bitcoins, the profits of which will be shared between the customer and Kodak, though customers must pay $3,400 upfront.

It represents the latest move by a company to try and exploit the recent rise in cryptocurrencies. However, it's a particularly bold move by a brand that historically has been slow to adopt emerging trends.

Kodak was slow to pivot its business towards digital photography and lost its dominant market position as a result. The company has said that the Bitcoin mining rigs are a way to exploit its legacy on-site power generating plant that has sat idle since it went bankrupt in 2012, according to the BBC.

However, industry experts have said the company is "chasing a disappearing target", and that it has little chance of competing with major mining servers already well established in China.

"With China and other countries having acres of mining servers running, Kodak cannot hope to be a major winner in this," said Clive Longbottom, founder and analyst at Quocirca, speaking to IT Pro. "Those who fall for the message of future riches and pay the $3,400 upfront cost may find themselves holding the proverbial tulip bulb worth nothing at the end of it - and a very nasty looking bank balance."

Kodak said its cryptocurrency would help build a distributed ledger of ownership rights for pictures used online, and that embedded Kodak One software would dredge the internet for images used without permission.

Although the blockchain industry is seen as a far more stable investment for companies today, Kodak's announcement has raised questions as to what difference it will make for online rights management, particularly as services like Shutterstock offer similar protections.

"I would have thought the main problem in online photo rights management is tracking photo use and enforcing compliance," said Vili Lehdonvirta, associate professor at the Oxford Internet Institute, speaking to IT Pro. "Whether the rights data is recorded on a blockchain or some other medium seems less important."

The Long Island Iced Tea company recently saw immediate gains after rebranding itself as Long Blockchain, with stock prices tripling overnight. The company planned to raise $8.4 million with a stock offering, with the view of buying its own Bitcoin mining machines, however, the company has since abandoned its plans, as stock value dropped on the news that it would be selling shares to pay for cryptocurrency mining.